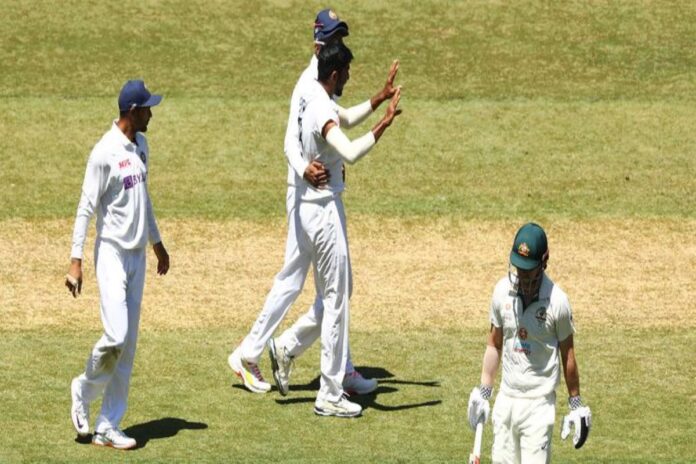 India’s Jasprit Bumrah, whose four-wicket-haul helped the visitors bowl Australia out for 195, revealed that he was looking to only hit the ‘good areas’ and claimed that his trick was to keep things simple. Bumrah also heaped praise on Ashwin and Siraj, who together accounted for 5 Aussie wickets.

Indian fans feared the worst after Australia won the toss and elected to bat at the MCG, but, as he did two years ago, Jasprit Bumrah upped his game just when India needed it the most – only this time sans Mohammad Shami and Ishant Sharma. In just the fifth over of the day he accounted for the wicket of Joe Burns, after which he kept the noose tight, playing second fiddle to a rampant Ravi Ashwin, and then once again broke the ominous Head-Labuschagne stand to give the visitors the edge. The 27-year-old did not put a foot wrong all day and finally wrapped up the tail to finish with figures of 4/56, making it 13 wickets in 3 innings at the historic venue.

The right-armer was under pressure after having only picked two wickets in the first Test, but speaking post the first innings, Bumrah revealed that he reaped rewards for keeping sticking to basics and keeping things simple.

“It was a good day. When we bowled earlier there was a bit of moisture. Just trying to bowl in the good areas. Sometimes when you try too hard you don’t get that success, so was just sticking to the basics,” Bumrah told Fox.

The star of the day, apart from Bumrah, was off-spinner Ravichandran Ashwin, who claimed three wickets including the big scalp of Steve Smith, and he was duly supported by debutant Mohammad Siraj, who put on a fine showing and picked two wickets himself. Bumrah heaped praise on the duo and expressed that it was ‘heartening’ to see Ashwin get purchase as early as Day 1.

“Ashwin has been bowling really well. He’s getting a good turn, good revolutions on the first day itself and it is heartening to see. Siraj was very happy, he was waiting for his turn.”