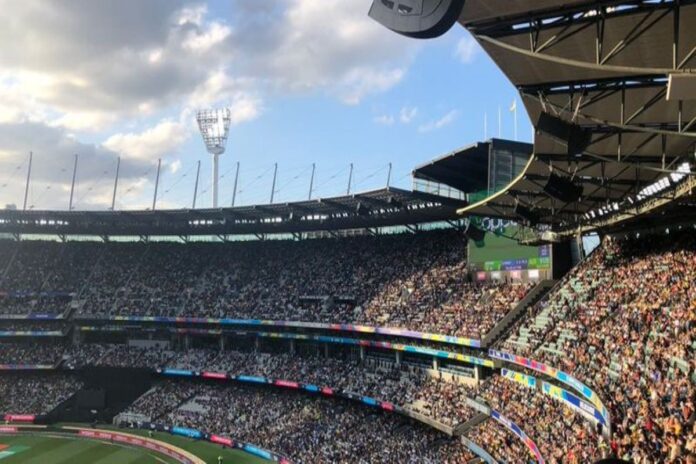 Melbourne Cricket Club CEO Stuart Fox has revealed that he would love to see the MCG host more spectators should it get hold of the third Test of the ongoing series, and confirmed that a new plan would be re-submitted in that case. MCG, for the ongoing Test, has capped the spectator count at 30,000.

Not long ago the prospect of the historic Melbourne Cricket Ground (MCG) even hosting the Boxing Day Test looked bleak, owing to a Covid outbreak in the state of Victoria, but a remarkable two-month turnaround has seen the venue emerge as the safest place for cricket in the entire country. So much so that Cricket Australia (CA) earlier this week confirmed that the MCG will serve as the backup to host the third Test should the game get relocated from Sydney, where there has been a concerning Covid cluster.

Covid restrictions have meant that for the ongoing Boxing Day encounter, the MCG has been able to host only a maximum of 30,000 spectators per day, but Melbourne Cricket Club CEO Stuart Fox has revealed that the number could increase should Melbourne be awarded the third Test. Fox told smh.com.au that should it get confirmed that MCG will host the third Test, he will submit a fresh plan to the Australian government seeking permission to host more fans.

“I would love it but we have to go do what’s right for the community. If it’s confirmed the MCG is hosting it, we go back to the government and re-submit another plan and they will have a look at it,” Fox was quoted as saying by the ‘Sydney Morning Herald’.

“It’s more important we get this one away safely and then we will reassess after that.”

The MCG were alerted as early as the end of November to be ‘prepared’ to host back-to-back matches, as a contingency plan should the situation worsen in any other state, and the tireless work of the ground staff saw the venue be chosen as the official backup. But despite the prospect of hosting an extra Test looming, Fox hoped for the third Test to remain with Sydney.

“Yes we can, we are ready to go but, I have said all along, we really do hope it can stay in Sydney. It’s a really, really special Test,” he said.

“…I really do hope it gets away in Sydney but we are on standby, we are ready to go. There are a few challenges with that but, if we are needed, we are ready.”

Victorian sports minister Martin Pakula, meanwhile, revealed that the state wanted to tread cautiously with the Boxing Day Test in terms of spectators, but admitted that he sees no reason why more spectators cannot be hosted.

“This was always going to be the event where we were more on the conservative side in terms of numbers. We want to test the processes,” Pakula said.

“I am sure Cricket Australia would like to see a slightly bigger crowd if they could get it. I think our position on that is, let’s wait and see for a decision on where the Test is,” he said.

“If the Test is going to be at the MCG, then Cricket Australia would submit a plan. If it’s for a slightly higher number, then that would be a matter for the CHO (chief health officer) to assess.”