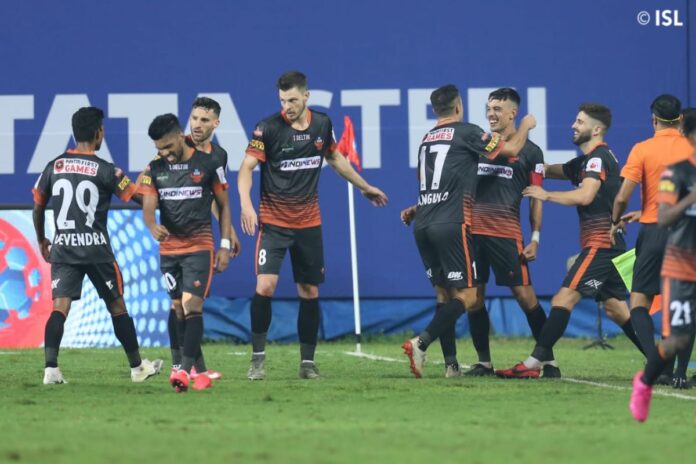 FC Goa closed the gap on the top four as they came back from a goal down to beat Jamshedpur FC at Tilak Maidan, Vasco, on Wednesday.

Stephen Eze (33’) had put Jamshedpur ahead in the first half but Angulo’s brilliant brace (64’, 90+4’) helped Goa claim all three points and end JFC’s six-match unbeaten run.

Jamshedpur broke the deadlock at the half-hour mark and the goal came from a set-piece. Aitor Monroy put in a long ball at the far post and Eze managed to beat Mohammad Nawaz with an outstretched right foot. The Goa custodian should have done better.

Mohammad Nawaz made a fine save in the 52nd minute to prevent Jamshedpur from going two up. Lovely trickery from Isaac Vanmalsawma on the right saw the ball come to Jackichand Singh. He played a first-time pass to Aniket Jadhav, who cut inside to his left. Aniket Jadhav took a few touches as a few Goa players slid in front of him. Aniket then pulled the trigger but Mohammad Nawaz got a hand on it. The ball clipped the crossbar and went out for a corner.

Goa squandered an opportunity when Angulo shot wide with only the keeper at his mercy. Minutes later, Ortiz had a shot saved by Rehenesh. But Goa was not to be denied. The Gaurs were awarded a penalty when James Donachie was brought down in the box by Alexandre Lima. Angulo sent the keeper in the wrong direction to net his seventh goal of the competition.

Goa was lucky not to concede late in the game when Valskis played Lima on goal. The latter took a first-time shot which hit the crossbar, bounced off the line, and came back in to play. But replays suggested that the ball bounced inside the goal.

The win moved Goa to the 5th spot with 11 points from 8 games. Meanwhile, Jamshedpur missed an opportunity to move into the top 4. They are now 6th with 10 points from 8 matches.