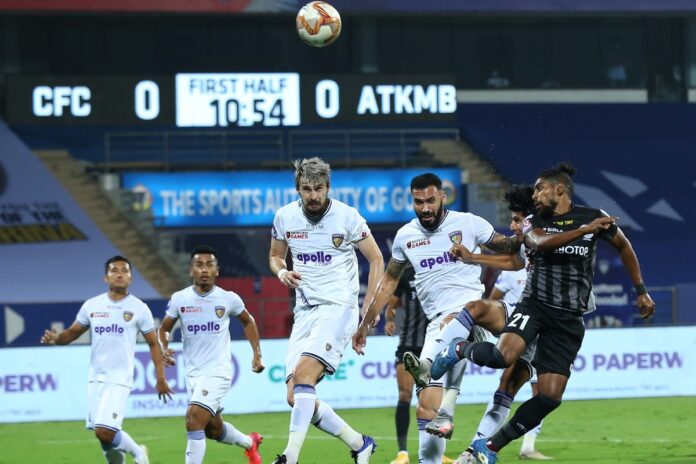 Chennaiyin FC had to settle for a 0-0 draw against a strong ATK Mohun Bagan side in the 42nd match of the Indian Super League (ISL) at the GMC Bambolim Stadium in Goa.

ATKMB got the better start as Chennaiyin looked nervous in the opening minutes.

ATKMB grew into the game later on, with their main attacking outlet Roy Krishna often finding himself in the thick of things. In the 19th minute, he supplied Manvir on the right and got into position to receive the ball back, only for the latter to lose it. A minute later, he chased down a deflected ball and nearly scored but was flagged for offside.

Chennaiyin arguably had the best chance of the half just as it was coming to a close. Memo Moura diverted Crivellaro’s freekick into the path of Enes Sipovic, who had a wide target to aim at. However, he only managed to shoot straight at Arindam.

ATKMB came out with a lot more intensity in the second half and were pressuring from the front. Chennaiyin defense did well.

Both keepers made some very crucial saves as the match kept getting intense with both sides intent on breaking the deadlock.

It was a game where defenders outshined their attacking counterparts.

Chennaiyin, in particular, had multiple chances to put the game to bed, but a brilliant display from ATKMB goalkeeper Arindam Bhattacharya prevented them from finding a goal.

Both teams had opportunities but neither had their finishing boots on. It was an entertaining game but goals were missing.

With this one point ATK Mohun Bagan went to the top of the table meanwhile Chennaiyin sit six positions below them.