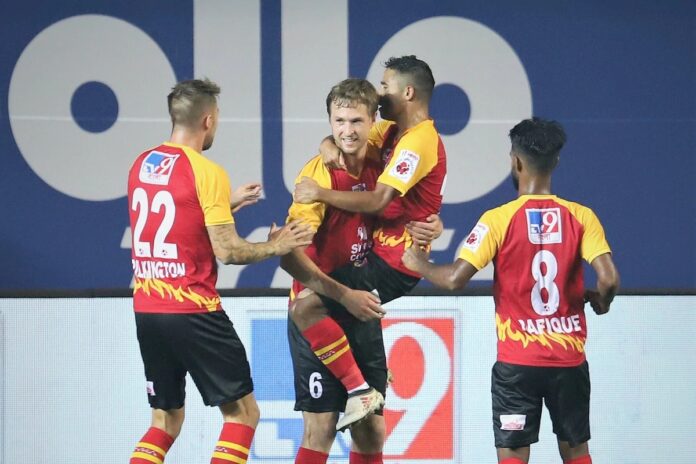 German midfielder Matti Steinmann emerged as the unlikely source of goals for SC East Bengal as the Kolkata side rallied to draw 2-2 with Chennaiyin FC in the Indian Super League on Saturday.

In the 13th minute, Sylvestr lobbed one from the center-line to release an unmarked Lallianzuala Chhangte. The pacy winger then used his speed to produce a strong run on the left side and shot through the pursuing defender and ‘keeper to put CFC ahead. It was Chhangte’s first goal of the season and a much-needed one for the Indian who has squandered more than half a dozen chances so far this campaign.

SCEB’s best chance came in the 38th minute when Mohammed Rafique received a ball over the CFC defenders and dodged the ‘keeper to get into an open goal position. However, Deepak Tangri produced a sliding clearance from behind as Rafique delayed taking his shot to steady himself.  In the 59th minute, Steinmann, who was unmarked, headed in a corner from Bikash Jairu to equalize. He became the second German to score in the ISL since Manuel Friedrich did so in 2014.

CFC pulled ahead once again five minutes later when Rahim Ali scored after starting a good run on the left side. The 20-year-old combined well with Rafael Crivellaro and Sylvestr, who gave the final assist to the Indian striker.

It was the first time in the ISL this season that two different Indian goal scorers found the net for a team as Chhangte and Ali scored for Chennaiyin.

But Csaba Laszlo’s men surrendered the lead yet again from a set-piece when goalkeeper Vishal Kaith failed to collect a header from Anthony Pilkington with the ball falling in front of Steinmann, who drilled it in without trouble.

CFC will yet again rue it’s poor defending from set-pieces as it squandering the lead twice from corners. The former champion also failed to finish its chances, especially in the final ten minutes with Jakub Sylvestr missing some easy opportunities against the open goal.

The draw sees both clubs move up a spot as CFC climbed to seventh and SCEB occupied the 10th spot.