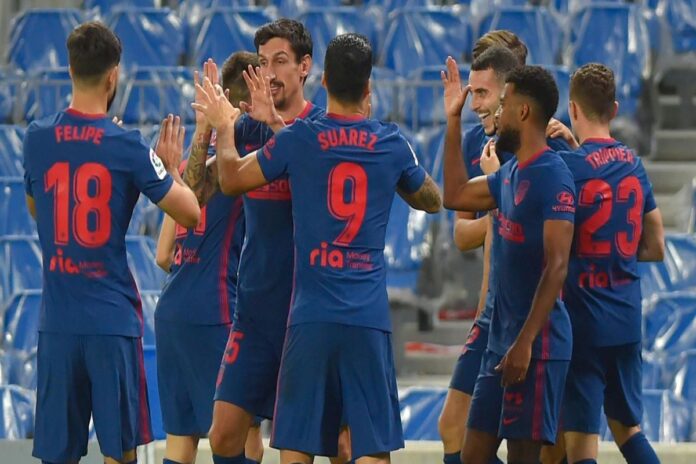 ‘Why not dream of winning the La Liga?’ For most of the opening thirteen games this season, few believed it because we are, after all, only fifteen games into the season. Then came an expansive, defensive and truly dominant performance against Barcelona and suddenly it had everybody dreaming.

Now after that disaster-class of a Madrid derby, Atletico de Madrid still sits twelve points clear of Barcelona at the top of the La Liga table. They’re level with Real Madrid at the same time with Real Sociedad and Villarreal close behind challengers. The thing about either side, despite their performances this season, has been the fact that Villarreal were hovering around the relegation zone last season while Sociedad were battling mid-table mediocrity.

There was absolutely nothing that screams title challenger about them last season but then again this has been possibly the weirdest season and that will continue as the year progresses. 2020 has been weird, a pain in the backside but it has also handed the world a chance to be one with themselves. Stuck in their houses, contemplating their existence and it has seen a chance to find their inner peace flood many including football clubs.

That includes El Cholo and Atletico de Madrid because they are playing the football of their lives and one that nobody ever expected them to do. An expansive, fluid counter-attacking style built on the back of a rock-solid defense, in the league more than anything, and it shows. Nobody in Spain has been able to cope and that includes fellow title challengers Villarreal. Los Rojiblancos face Real Madrid on Sunday and Real Sociedad before Christmas but until then, things are going swimmingly well for Diego Simeone.

Because in a condensed and fixture heavy season, where teams are forced to play games every three to four days, things will get complicated for the teams that love a high-press. That includes Jurgen Klopp’s Liverpool, Real Madrid, RB Leipzig, Bayern Munich and so many others. Tired legs come into play, hamstrings start tightening up and then slowly but steadily it forces managers to opt for plan B.

But that isn’t the case with Diego Simeone and Jose Mourinho because their brand of football seems to be perfectly suited in a weird season. That’s what makes it even weirder because not even a year ago both men were struggling to cope with being relevant in a world that was moving far too fast for them. But then in an instant – things changed, schedules became tighter than ever and now we witness greatness. That’s why there’s the air around the Spanish top tier.

An air of dominance that one hasn’t felt since Pep Guardiola’s Barcelona swept the world off their feet and all that is emanating out of the Wanda Metropolitano Stadium. Because while there has never been a better chance to win the La Liga, and might never be a chance as golden as this, Atletico seems to be the only ones in a perfect position to do what they need to do and win another league title. Just imagine if you said that ten, twelve, games into the 2013/14 season where they actually did win the title.

You’d be thrown into a loony bin and locked up for the rest of your life. Because at this point of that season, Atletico de Madrid were second and Barcelona were leading the pack. Real Madrid were close behind them with Villarreal and Athletic Bilbao not too far behind. And even then, nobody had pegged Diego Simeone’s boys to even come close to lifting the title, maybe they’d manage a top-four spot and play Champions League football.

Maybe they’d come as close as second or third before falling off the wagon but nobody pegged them to finish three points ahead of Barcelona. Not the chaotic and no-direction Barca that we see today but a team that was really looking like they could win not just a La Liga title but a treble. This was a side that had just signed Neymar, had Alexis Sanchez, Lionel Messi, Pedro, Cesc Fabregas, Andres Iniesta and a host of truly great players.

It was a side that could do things and they hadn’t even signed Marc Andre-Ter Stegen yet, so imagine what they could actually do. But things have clearly changed and for one thing, a lot has happened at Atletico de Madrid because not even ten months ago, they were in complete chaos. Five-game winless run and rumours about Diego Simeone no longer being the right man, and after the losses of key players, you’d expect the club to struggle.

But then they made it even worse by spending €130 million on an unproven teenager and the experiment didn’t work. Or did it?

Saul Niguez and Jan Oblak’s words at half-time during a game against RB Salzburg had us all laughing and then wondering the same thing, that teenager has got magic in his boots. That unproven, €130 million punt has got magic in his boots and is, arguably, the best player in Spain right now. And, it may just be a coincidence but Joao Felix is doing it while playing in that free-role that a certain Argentine did under Pep Guardiola and he’s turned into a magician.

And the thing is, he’s doing it all for Atletico de Madrid, a team and a manager that has snuffed out many creative flames in the past. But then you look at Yannick Carrasco’s resurgence as a proper footballer, Luis Suarez playing like a man wronged by Barcelona and Marco Llorente’s transformation into a goal-scoring second striker after finding his high against Liverpool and then realise that all they needed was time. Time to sort out the chinks in the system, to get acclimated with El Cholo and then produce results.

Ten months and a lockdown later, this team is perfectly set up to not just win a La Liga title but to dominate the world while doing so and they’re doing just that. Before that Madrid loss, they were one of two unbeaten sides left in Europe – the other being AC Milan of all teams – and scoring goals freely with 26 so far. But not at the cost of their defensive structure with just five goals conceded. That’s right, five goals after thirteen league games with nobody coming close to even matching that tally.

Of course, their record in the Champions League is rather spotty with eight conceded in their six group stage games but even makes them better than anyone else. Because that makes it a grand total of thirteen goals conceded in nineteen games, something that not even Jose Mourinho’s Tottenham can compete with (19 goals in 20 games).

Come back to Spain and second-placed Real Madrid have scored 27 and conceded 14 but they’ve played fifteen games and that just adds to everything. Because Atleti, after ten games, sits atop the La Liga table and on top of that, they’ve got two games (against Sevilla and Levante) in hand thanks to a break at the start of their season. Should they win that, their lead at the top of the table will turn into six points.

Now in a chaotic and an unpredictable season, things could change in an instant especially when you’ve got twenty-five games left. But that’s the beauty of football, despite decades and centuries spent trying to predict and understand the game, the sport has remained about as unpredictable as it gets. A thumping Sergio Ramos header in a Champions League final many a year ago proved that for Atletico de Madrid and brought them back down to earth.

But that performance has been symbolic for many that Atleti have produced since. Dominance from most of the opening 90 minutes before eventually running out of steam just as they’re about to clamber onto the summit. It’s exactly why that loss to Real Madrid has many fans concerned because for the first time this season, Atletico didn’t just look tired and struggled to play their football but they looked like they were outclassed.

It’s the first time this season that Atletico looked truly out of their depth and that’s where the heart of a true title challenger comes alive. Because now, they’ve got the chance to put all their demons behind them and surge forward, ignore this loss and place it in the “one-off” category. The chance to prove to the world that one loss means absolutely nothing, no matter how big it may seem, especially in football’s most unpredictable season. And so far, they’ve done just that but Atletico de Madrid have ways to go.

Because being predictable has defined Atleti perfectly especially since they won that league title and hopefully that changes. Because if there is one thing that proves the unpredictability of football, it’s Atletico de Madrid and Leicester City. But as Diego Simeone continues to be as coy as possible about his team’s chances, as Atletico de Madrid players continue to feed into the “game by game” narrative, there seems to be something inevitable about it all. But then again, who said football is predictable?