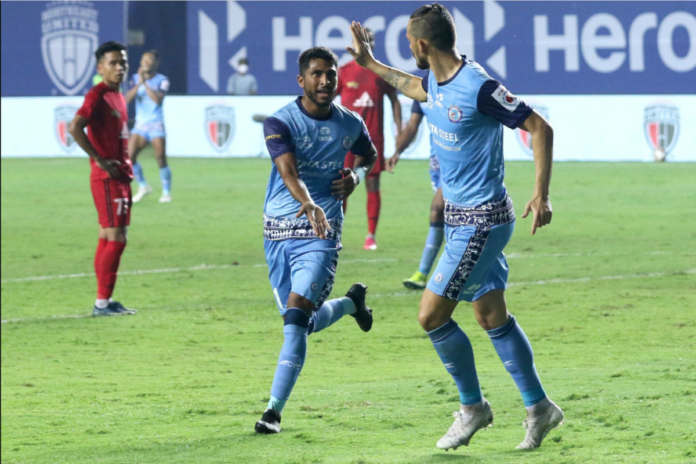 Jamshedpur gets back to winning ways and its the first defeat for Northeast United FC. Aniket Jadhav with his first goal of the season and TP Rehenesh continued his superb season with a penalty save to keep the lead intact as the red miners win.

Both sides were unable to break the deadlock in the first half as they managed to cancel out each other’s threat. As a result, no shots on target were registered.

Northeast nearly had the chance to go ahead in the 18th minute when Idrissa Sylla and Appiah combined well at the edge of the box. However, the Ghanaian striker placed his effort wide.

Jamshedpur, too, had their chance to grab the lead and it arrived just before the break. Alexander Lima found Stephen Eze in the box with a long ball but the towering defender failed to get his header on target.

The two teams started the second half without any changes. Just when Northeast looked to be gaining a foothold in the game, Jamshedpur scored through Aniket Jadhav in the 53rd minute.

NEUFC was given a lease of life in the 65th minute when Benjamin Lambot won a penalty. Sylla stepped up to take it but T.P. Rehenesh produced a fantastic save to deny him.

Jamshedpur defended with resilience in the dying minutes to ensure they bagged their second win of the season.