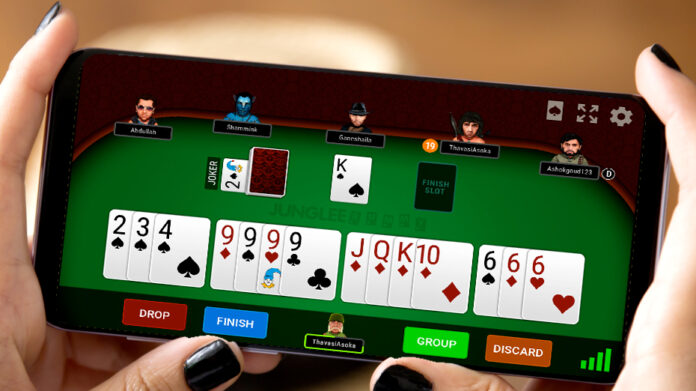 Perhaps one of the most popular card games in India, Rummy has become a household name in the country for families and friends alike. Unlike many other card games, Rummy involves a lot of skill and a strong thinking capacity. While in the past Rummy has generally been played in social gatherings, the introduction of online Rummy games in the new millennium has made it easier for individuals to compete via the web with other strangers and also earn real money by winning.

Of course, it would be unfair to say that sitting around a table playing Rummy with good pals and family isn’t fun but the truth is that with the hectic day-to-day schedules of the modern world, it can be a little difficult bringing your close ones together every evening to play a game or two.

This is where online Rummy comes into play, allowing you to compete with others from around the world for as many hours as you want in a day. What’s more, you also stand a chance to earn money by winning.

In online Rummy, you can choose to play against 2-6 opponents and also decide whether or not to play using the Joker cards. Some of the most popular types of online Rummy include Points Rummy, Deals Rummy, and Pool Rummy.

How many people can play Rummy?

Rummy is basically a multiplayer card game that involves anywhere between 2-6 players. In the event of only two people competing, each player will receive two cards. If three or four people play, seven cards are distributed to each player. When there are fix or six individuals, a total of six cards are dealt to each player while the remaining cards are placed face down, forming the remaining deck.

How to play Rummy?

While you are required to plan your moves well, the entire concept of Rummy in itself is not at all complicated and is probably one of the most engaging card games out there. The primary objective of the game is to group cards in valid sequences and sets.

Coming to the game, all 13 cards need to be arranged in a valid set or sequence. You are required to make at least two sequences – one of which has to be a pure sequence while the others could form any valid sequences or sets.

An impure sequence, meanwhile, refers to a group of three or more cards of the same suit but with the additional use of a Joker card to form that sequence. An example would be arranging 2, 3, Jack of any suit, 5 of spades. In this case, the Jack is used a wild Joker card and is used as a substitute for the 4 of spades.

Forming sets is a little different from the two mentioned sequences. In a set, you will be required to use three or more cards of different suits carrying the same value. This could also include a Joker card. For example, you could form a set by using Ace (hearts), Ace (diamonds) and Ace (Clubs) in addition to a Joker card, if you have one. This results in the player forming a valid set.

Interestingly, there are several Rummy game types although 13 Card Rummy is probably one of the most played in India. In this variant, a player is dealt 13 cards and is required to form sets or sequences to win the game.

Points Rummy is a variant of 13 Card Rummy wherein players need to pre-decide the rupee value and then play for points. Players win Points Rummy by declaring and finishing with a score of 0. The losing party will have to then calculate all remaining points that are in non-sets following which that final score will be added.

In this variant of Indian Rummy, Pool Rummy sees players pay a set entry fee that is then accumulated and forms the prize pool. Pool Rummy is available in 101 pool and 201 pool and is also the is the longest variation of Rummy. In both 101 and 201 pool, players whose scores reach 101 points or 201 points respectively, are eliminated from the game.

With Deals Rummy, players end up competing for a pre-decided number of deals. Players are handed a fixed amount of chips to play with after which the winning player will win chips from the losing players according to scores at the end of each round.

The 21 Card Rummy variant is played in the points rummy format while all other rules remain the same. Player compete for points that have a set pre-decided rupee value which keeps adding until the end. Playing 21 Card Rummy online can be a lot of fun once you understand the game.

Aside from the obvious, which is to understand the game well before placing any bets, there are certain tips and strategies you can follow to increase your chances of winning online rummy.

The first thing to do is to ensure you choose the right game. In online Rummy, there are several types of games such as free to play games, cash-based games aside from tournaments. Explore your options until you feel comfortable competing in any one of these formats of the game.

Read More: A Complete Guide On How To play Rummy

Your sole focus initially, should be to target a pure sequence. As explained earlier, you will not be able to win without forming a pure sequence, so let that be your prime objective once the cards have been dealt and you’ve arranged them.

Get rid of cards with high value from the start so that points do not accumulate. The bigger cards you hold on to, the higher the risk of finding yourself stuck with a big score.

Utilise the Joker efficiently and wisely. Try to avoid needlessly using the Joker unless you see the opportunity to create two sequences.

Like most card games, bluffing is as important as having the right cards. Hold on to the cards your opponents need for as long as you can and if possible, discard a few of your low-value cards to bluff your opponents.

Lastly, jump ship if things aren’t going well after several games. It is easy to get hooked to any game that involves money, but it is crucial to know when to stop. When all odds are stacked against you, then it’s probably time to quit.

If you’re looking to play Rummy online, there are countless rummy betting apps available. INDIBET offers customers Rummy games like never before and with the opportunity to earn real money. The registration process is simple and within no time, you’ll find yourself taking on as many Rummy challenges on the INDIBET app. You could also play Rummy with friends through certain apps.

Ans. Legal authorities in India have not imposed any restriction on Rummy. Hence, it is safe to play online rummy without finding yourself getting into any trouble. Find a suitable Rummy betting app for a hassle-free experience.

Q. Is Rummy a game of skill or luck?

Ans. While luck does play an important role in most card games, increasing your skills at Rummy will certainly increase your chances of winning. If you’re new to the game, try to play Rummy online free with apps and sites that don’t require you to make any deposits.

Q. How do you withdraw money from Classic Rummy?

Ans. That would depend on the app or site that you choose to play from. Read through the payment options and instructions to learn about how you can withdraw winnings from Classic Rummy.

There are several advantages of sites that offer essays. We'll be reviewing four top essay sites in this post. WriteMyEssay.com and ExpertWriting are the...
Read more