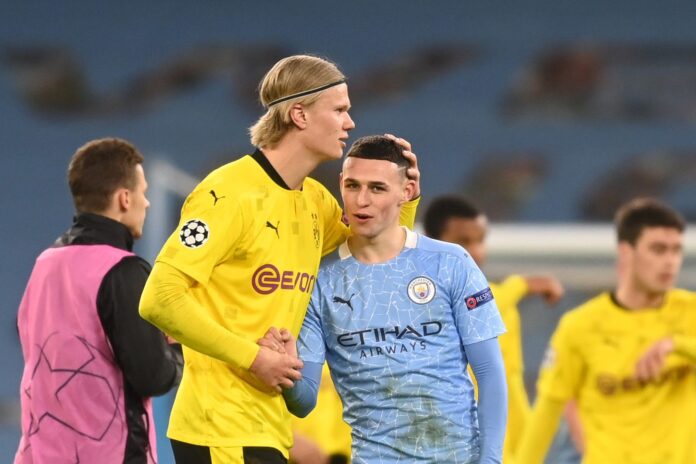 In light of Manchester City’s move for Erling Haaland, Jamie Carragher has admitted that while it is a brilliant move for City, he believes that there are still a lot of questions over the forward. The 21-year-old has thrived in Germany for Borussia Dortmund, netting 85 goals in 88 appearances.

Over the last two and a half years there have been a lot of rumours and reports floating around about Erling Haaland’s future, ever since he signed for Borussia Dortmund. But while no move materialized, the Norwegian kept thriving for the Bundesliga giants, netting an incredible 85 goals in 88 games alongside a handful of assists. Not only that, it has seen Haaland play a key role in Dortmund’s success with the club consistently challenging for the title despite managerial struggles.

However, after years of speculation, Manchester City confirmed, earlier this week, that they have reached a deal in principle with Borussia Dortmund over a move for Haaland. It does bring an end to the 21-year-old’s chapter in Germany and starts a new one in England, something that Jamie Carragher believes could prove the forward’s talent. The pundit admitted that while it is a brilliant signing, “there are lot of questions” about Haaland and ones that will be answered soon.

“Brilliant signing – not just for Manchester City but for the Premier League. I think we are all intrigued as to how he will do. Along with [Kylian] Mbappe you feel he is one of the next two superstars to eclipse [Lionel] Messi and [Cristiano] Ronaldo and you are just delighted he’s in the Premier League,” Carragher said, reported Sky Sports.

“More often than not those players have gone to a Real Madrid or Barcelona, but you feel like the Premier League is the strongest league now – you’ve seen how well we’ve done in the Champions League. He will score goals – that’s what he has been brought in to do, of course he will. But that doesn’t guarantee that City will win everything. They will have to integrate him into the team. That means City will lose a creative player who helps them keep the ball.

“There are lots of questions, including from myself. We will be analysing his performances at City and how he fits in. They had a world-class striker a few years ago in Sergio Aguero and they have another one now.”