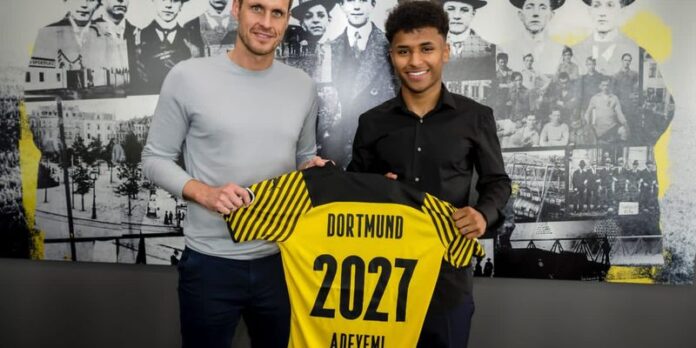 In a statement, Borussia Dortmund have confirmed that they have signed RB Salzburg forward Karim Adeyemi to a five year contract in a deal worth around €38 million plus add-ons. This comes less than a day after Manchester City confirmed that they had a deal in principle to sign Erling Haaland.

With the rumour mill buzzing about Erling Haaland’s potential move to Manchester City, many wondered how Borussia Dortmund would replace the forward next summer. Not only that, the Bundesliga giants have been heavily linked with a move for RB Salzburg’s Karim Adeyemi but no move had materialized as of yet. However, with City confirming a deal in place to sign Haaland, Dortmund confirmed, a few hours later, that they had signed Adeyemi.

The Bundesliga giants, in a statement, confirmed that the move and revealed that the young German had signed a five year contract with the club. Not only that, reports indicated that the fee would rise up to €38 million plus add-ons with the move completed after he finished his medicals.

“Borussia Dortmund has signed offensive player Karim Adeyemi from Austrian champions RB Salzburg. The 20-year-old completed his medical check-up in Dortmund today and signed a contract that was valid until June 30, 2027 in the late afternoon,” reads the statement on the club’s website.

The former Bayern Munich youth product thrived in Austria, winning six trophies with the club and contributed to 28 goals this season which included six goal contributions in the Champions League. That combined with his age and talent, saw Adeyemi heavily linked with a move to England and Germany but he admitted that once Dortmund entered the race, he was only going to sign for them.

“As a little boy, I was fascinated by black and yellow fast-paced football. That’s why it quickly became clear to me that I would like to switch to BVB when I found out about Dortmund’s interest. I deliberately signed for the long term because I’m convinced that we’ll be an exciting team that, with the support of the fantastic Dortmund fans, will be able to play for and win titles in the medium term,” Adeyemi told the club’s website.