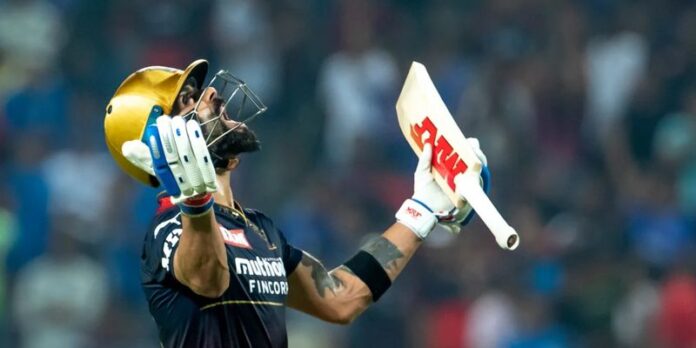 Virat Kohli is having a torrid time with the bat in IPL 2022 and has consistently been getting in strange ways which were unseen in his career till now. RCB skipper Faf du Plessis talked about Virat Kohli’s form and he feels that Kohli is trying everything but things are not going his way.

Virat Kohli is not having a great time in IPL 2022 and that has been a major cause of concern for the Royal Challengers Bangalore. In the game against Punjab Kings, Kohli was looking solid as he had struck two boundaries and a six during his innings. But, a short ball into his rib cage by Kagiso Rabada resulted in his gloves getting brushed as the ball hit his thigh pad and went to the fine-leg fielder. The right-handed batter was seen saying something to himself in anger while walking back to the pavilion.

RCB skipper Faf du Plessis talked about Virat Kohli’s innings after the game. While speaking at the post-match presentation he said, “He (Kohli) is seeing the lighter side of it, every single way that you can possibly get out is happening to him. That’s how the game works. All you can do is to keep trying hard, work hard and stay positive. He played some good shots tonight, obviously would want him to carry on. Bad patches happen to all of us, he’s taken it on the right note”.

Faf du Plessis admitted that the game against Punjab Kings was not great for them and they need to win against Gujarat Titans which will be their final league match.

“Not a great outing for us tonight. We will take a day off and then see how we can switch on for a game that’s a must-win for us. One more net session isn’t going to make you a better player, it’s about making yourselves stronger in the mind. If we play to our potential, we are a very strong side. Unfortunately, we didn’t do that tonight,” Du Plessis concluded.