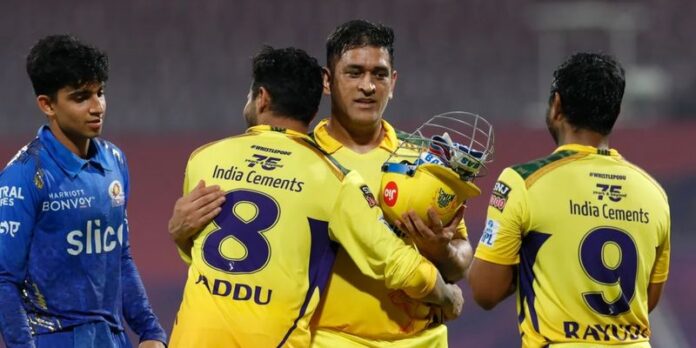 MS Dhoni has not taken any credit after Chennai Super Kings beat Sunrisers Hyderabad by 13 runs on his return to the franchise’s captaincy on Sunday. Dhoni explained their batters Devon Conway and Ruturaj Gaikwad gave the start they were looking for, which later helped them to secure a victory.

MS Dhoni returned to lead Chennai Super Kings (CSK) with a 13-run win over Sunrisers Hyderabad (SRH) in Match 46 of the ongoing Indian Premier League (IPL) at Maharashtra Cricket Association Stadium, Pune. They rode on Ruturaj Gaikwad’s 57-ball 99 and Devon Conway’s unbeaten 55-ball 85 to post a mammoth total of 202/2 after Kane Willamson won the toss and asked them to bat. SRH put on a valiant effort in the chase but yet, but they closed on 189/6. Nicholas Pooran remained unbeaten on 64 off 33 balls, while Williamson scored 47 off 37 balls.

It was an outstanding 182-run opening-wicket stand between Gaikwad and Conway to set the tone for Dhoni and Co. Gaikwad was the aggressor in the initial phase, smashing six sixes and as many fours before missing a well-deserved hundred by a solitary run. Conway, on his first match after marriage, was equally impressive at the death overs. His knock was laced with eight fours and four sixes.

However, speaking at the post-match presentation, Dhoni, when asked what was his role to change the environment, revealed that there was nothing particularly done by himself to turn things around.

“I think it was a good score to defend. It’s one of those coincidence where we got off to a good start and forced the bowlers to bowl the areas where we wanted to hit. The kind of target we got was a very good one,” Dhoni told at the post-match presentation.

“The phase that really worked for us was where the spinners were bowling after 6 overs. We have had quite a few good batting performances, we have given couple of overs that went for 25-26 runs, and even when you score 200, it really comes down to 175-180 in 19 overs.”

Despite the result, CSK remained ninth on the points table, with three wins in nine matches. SRH, on the other hand, remained at fourth, with five wins in nine attempts.