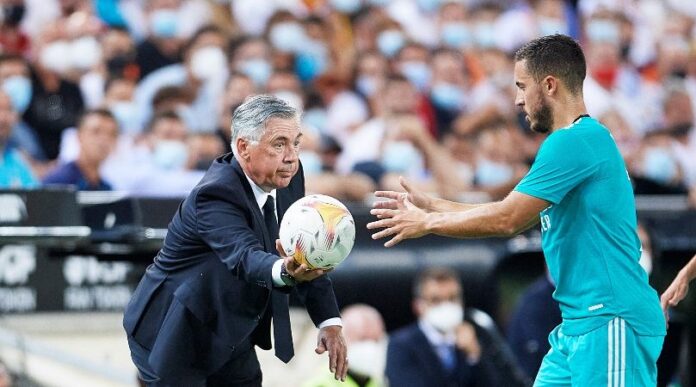 Carlo Ancelotti has played down rumours linking Eden Hazard to an exit from the Santiago Bernabeu in the summer by suggesting that the Belgian playmaker is desperate to show his worth to the side next season. The Belgian joined Real Madrid in 2019 and has suffered a stop-start life at Spain.

Eden Hazard signed for Real Madrid from Chelsea in 2019 for a reported fee of €100 million, which could rise to €146.1 million if certain clauses are activated as the Belgian completed a dream move to the Santiago Bernabeu.

The Belgian winger had cemented his legacy as one of the best wingers during his time at London as he scored 110 goals and registered 92 assists in 352 appearances across all competitions.

The Belgium international was instrumental for the Blues as he helped the London club claim two Premier League titles, one FA Cup, one EFL Cup, and two Europa Leagues during his time at the club.

It has not gone according to plan for the 31-year-old at Madrid as he has struggled with various niggling injuries while finding it hard to replicate his performances at Chelsea with the Spanish club whenever fit.

The Belgium star has helped the Spanish club claim two La Liga title and a Supercopa Cup but he has just made 47 appearances for the Spanish giants across three seasons in Madrid. Rumours suggested that Hazard who hasn’t featured for the Spanish team since February would be offloaded by the Los Blancos to free up funds for reinforcements elsewhere.

Madrid manager Carlo Ancelotti has come to refute suggestions that the Belgian may depart the Spanish club ahead of next season and confirmed that the 31-year-old is set to stay at the club.

“We haven’t talked about it. His plan is quite clear; he stays and he does it with a lot of motivation because he hasn’t had a good time in recent years and he wants to show his quality. With a squad like Real Madrid’s you always play a lot of games. I think the quantity of minutes isn’t so important, its about the quality,” Ancelotti said in a press conference.