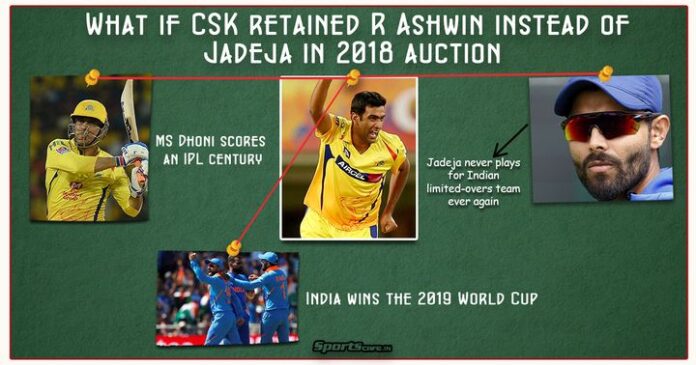 Dhoni might have attended an insane cult following in Chennai, but Ashwin is the original Chennai Super King. Inarguably he is the greatest cricketer to have come out of Tamil Nadu and his Veera Level performance in the lengths and breaths of the country has made him a true giant of Indian cricket.

Ashwin plays his cricket with a lot of heart and method and passionately speaks about it. While it was already a validating scenario, yesterday’s match between India and England put his cult to a whole new level. The Knowledgeable Chennai Crowd put their hands up to celebrate their hero and a modern-day titan and one of the greatest match-winners the country has ever produced.

However, the tragedy had struck in 2018 when CSK decided not to retain him or buy him back in the auction when the franchise returned to the fold following a two-year ban. MS Dhoni, Suresh Raina, Ravindra Jadeja, Faf du Plessis, and Dwayne Bravo – everyone was back but not the man who once was their most-prized possession.

In this week’s segment, we will traverse the clock back a bit and revel in the glory as Ashwin dons his Canary Yellow with his specks on. He would rush through his motions from the Anna Pavilion End and bamboozle the opponents with his combination of leg-break and off-break and everything in between.

It is 2018 retention day and CSK just announce that they would retain Dhoni, Raina and Ashwin for the mega edition – a prelude to retaining their core for what was going to be a truly emotional season for them. In the auction, the franchise go for the old core and chose to buy Jadeja, Faf du Plessis, Bravo back while Harbhajan Singh, who in reality ended up in CSK, joins forces with Yuvraj Singh at his home franchise Kings XI Punjab.

After CSK’s home matches are moved to Pune after a bit of trouble due to Cauvery water issues, Ashwin’s familiarity with the venue during his time with Rising Pune Supergiant helps big-time. He emerges the biggest factor for CSK’s dominance, with the off-spinner ending up with 22 wickets from 14 league games. Sunrisers Hyderabad have a set template mixing spinners and slower pacers to great effect and fix a final date with MS Dhoni’s boys.

In the final at the Wankhede Stadium, Dhoni plays the knock of the tournament and takes his attack on Bhuvneshwar Kumar and Sidharth Kaul to score his first century of his T20 career. Balls are carted around and before Rashid Khan holds on to Dhoni, things are out of reach for the 2016 Champions. Ashwin then casts his magic, unleashes another five wicket haul to help CSK to the title in 2018.

Now, fast forward, as Hardik Pandya suffers an injury in the 2018 Asia Cup, India are left with no choice than calling back Ravichandran Ashwin as a back-up. Upon his comeback, Ashwin strikes an immediate impact by deceiving the top four Bangladeshi players as India enters the final. India decide to go with the option of Kuldeep and Chahal for the final with Kedar Jadhav being the third option. India don’t face a lot of problems and coolly canter home.

But that leaves them with a big question. India travel Australia where they can’t play three spinners plus Kedar, thus Ashwin sits on the bench. It is then reality strikes as Kuldeep starts his underperforming trail, with the rut entering the IPL. He is a massive disappointment for KKR in the 2019 edition with Ashwin once again running riot in his home cauldron of Chennai.

Ashwin joins force with Imran Tahir to form the most lethal bowling pair in the league and CSK don’t give anyone a slightest of blip during their domineering campaign at home. Ashwin is equally potent on the road as CSK enters another final. Facing them are their archrivals Mumbai Indians who are searching for the fourth title.

Knowing it wouldn’t come easy in Chennai, who despite boasting a great record there, fills their side with spinners and their top order attacks right from the word go. Things fall in place at the centre as Mumbai canter to 197 in 20 overs, leaving a daunting target in front of CSK who have always done the “trial by spin” job well barring this time.

CSK get off to a good start thanks to Watson and Faf du Plessis as the duo adds 130 runs in the opening wicket in 12 overs. The game is very well in pocket when Jasprit Bumrah gets to the thick of the things to ensure a major collapse as CSK were staring down the barrel at 160/7 in 17 overs.

Ashwin joins Jadeja in the middle and before anyone could realise anything, he lands a few lusty blows to Pandya to make his intention clear. CSK suddenly becomes the favourites but with Bumrah and Malinga set to bowl a couple of overs together, Mumbai believe. However, Jadeja finds solace in Ashwin’s intent as he jabs a couple from Malinga to take the scorecard to 187 and the mini turn around ends the story of thrill in a CSK win. CSK takes the mantle of the most successful team in the IPL to their kitty and Mumbai’s proclamations of odd years is stopped by the Men in Yellow.

The success, however, paves way for Ashwin to make a comeback in the Blue Jersey once again for the ICC World Cup and he finds the love once again. In the World Cup semi-final, with the wicket having a lot of moisture, he gets the ball to grip as it was Chennai and New Zealand are in absolute shambles.

Ashwin dominates them as India reaches the final, facing hosts England who are prepared like anyone else. And that resulted in Ashwin being taken down to cleaners by Jonny Bairstow and Joe Root – two fine players of spin – as the offie conceded 81 runs in 10 overs, accounting for only one wicket. India were given a target of 365 runs in the final and they had to do what Mohammed Kaif and Yuvraj Singh did 17 years ago to have any chance of winning over the Lord’s.

India suffer a mini collapse at the top as both Rohit Sharma and KL Rahul were back to the pavilion within six overs. Virat Kohli – the greatest run-chaser in limited-overs format – is in action now as he faces Plunkett and Woakes at their very best. He takes his time to get his eye in and receives the support from Rishabh Pant to forge a fine partnership. India facilitates their way to 180 runs in 30 overs and it is still a mountainous target from there on.

Rishabh Pant’s dismissal brings a mini heartbreak but all hopes are on Dhoni, who had just had a great IPL with the bat. Dhoni bats with composure while Kohli goes for aerial shots as the duo creates an orchestra of sorts. England are left frustrated in between and the only dismissal they want is that of Kohli. India slowly are on 309 by the end of 44th over, with 56 runs needed off 36 balls.

Adil Rashid is brought to bowl and he lands a perfect ripper to leave Virat Kohli stunned. India can’t believe it and with MS Dhoni’s hitting powers being on a wane, it is devastating for the fans as well. But dreams are what people can’t see in real life but Dhoni brings the ultimate dream to fruition with a 22-run over against Wokaes to bring the gap agonisingly close. Pandya is the next man in and it was a cakewalk from now.

The man from Baroda wields the power to dry and successfully dispatches every single bowler to come his way to bring the equation down to 10 off the last over. Dhoni hits a couple of fours on the first two balls and even though the third one was directly on the slot to be hit for a six, Dhoni does a Dhoni once again and just like the 2014 T20 World Cup semi-final, he defends it for a single to let Hardik Pandya hit the winning run.

There is a cheeky grin on Pandya’s face as India are on the historic cusp of winning their third World Cup title. Archer bowls a ball full of ferocity – which was surprisingly absent in the first three balls – but Hardik doesn’t care. He steps down the track and dispatches the yorker with the motion of the man in front. Think what? It is a helicopter that lands right at the centre of the stand and a country erupted in unison.