Home News Cricket News Keen To Work On My Fitness And Endurance Level To Play All... 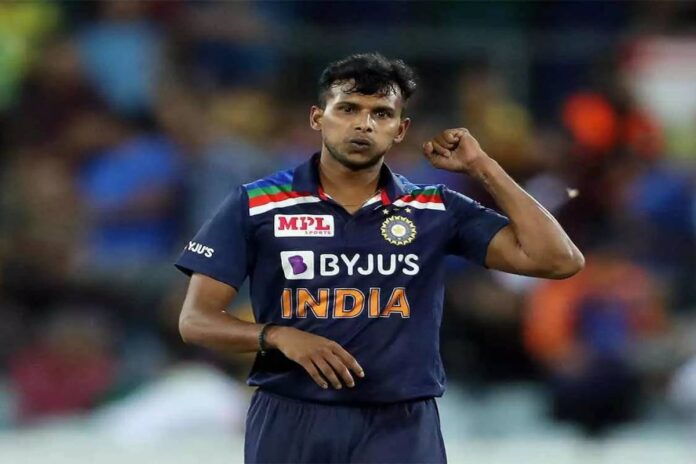 Having made his debut across all formats against Australia, T Natarajan has revealed that he is keen to work on his fitness and endurance level in order to play all three formats consistently for India. He also stated that there was complete backing for him from the management in Australia.

Following a successful IPL season, where he ended up 70+ yorkers, T Natarajan became an overnight sensation and was subsequently picked in the Indian side as a replacement for Varun Chakravarthy. With the rotation policy that they followed Down Under, the management handed a debut to the left-arm seamer in the third ODI in Canberra, where he ended up with flying colours, picking up two crucial wickets.

While he got a look-in in the 50-over format, he was a consistent part of the T20I set up in Australia, with Natarajan picking up six wickets in the series. Following his strong display, the management had asked him to stay back in the country, doubling up as the net-bowler for the Test series. With a plethora of injuries ravaging India, the left-armer made his debut in Brisbane.

After his debut in all formats and post his return to the county, Natarajan has revealed that he is keen to work on his fitness and endurance level to stand a chance to play all three formats for the national team.

“I am looking to play in all formats and will maintain my workload accordingly. I am keen to work on my strength and endurance levels in the coming months. This is the first time I’ve played for six long months at a stretch in my life. Because I trained continuously during those months of lockdown, I was able to take care of the workload in IPL and in Australia,” Natarajan told TOI in an exclusive interview.

“There was a lot of support from the team members and support staff. Not once did I feel that I was new to the side. In fact, I felt like I had been playing with them for a very long time. Everyone made me comfortable which was very special,” he added.

Natarajan, further stated that BCCI had asked him to take rest following the Australia tour, the reason why he wasn’t available for selection in the end phases of the Syed Mushtaq Ali Trophy for Tamil Nadu. The left-armer recalled head coach Ravi Shastri’s support before his Test debut.

“Ahead of my India debut, he said, ‘continue to do whatever you have been doing so far, but do it with confidence. Just go out there and bowl Bindaas.’ The kind of motivation one gets from him is enormous.”

“If I am given the go-ahead by the BCCI then I will certainly play the Vijay Hazare Trophy. In fact, I was asked to play in the Syed Mushtaq Ali but BCCI wanted me to be given a break and I couldn’t go on to play for TN in the competition,” he concluded.