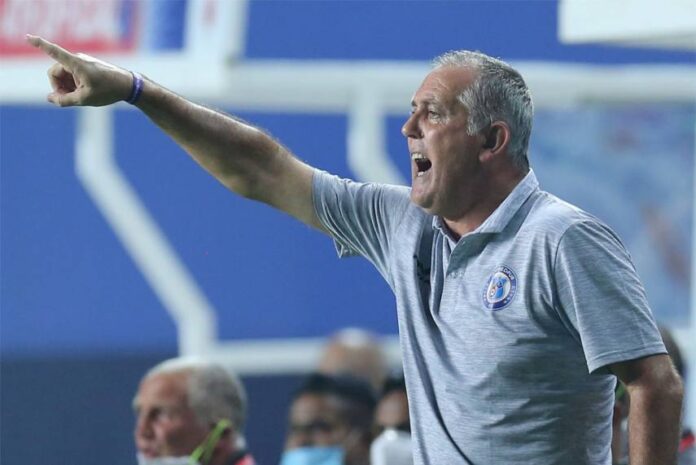 Jamshedpur FC needs to win their remaining couple of matches and hope that other teams lose points to qualify for the play-offs. On the other hand, Mumbai City FC are aiming to claim three points and close in their gap with league leaders ATK-Mohun Bagan and finish at the top this season.

Jamshedpur’s chances of qualifying for the Hero Indian Super League playoffs are hanging by a thread. They have to win the remaining two matches and hope for a miracle that the other four teams aiming to break into the top four drop points. That’s unlikely to happen but JFC coach Owen Coyle stressed his side needs to give their best to finish their season on a high when they take on Mumbai City FC at Tilak Maidan Stadium, Vasco, on Friday.

Goals win you matches but in the case of JFC, they have failed to get them. Their attack has been one of the most inconsistent in the league. In the last six matches, they have scored just thrice having attempted 58 shots, of which 12 were on target.

Coyle highlighted the importance of team effort in getting the desired results. “We cannot certainly look to relying on certain people to score goals,” he said. “We need people from different areas this is one area we need to continue to work on.”

To harbour any hopes of reaching the top four, Coyle’s side needs to register maximum points in their final two games, beginning from their encounter against MCFC. “We have to make sure that we will look to finish our season strong. We have to go for the six points and get on to 27. As three teams fighting for the four spot having 27 points, we have the same chance of reaching that total, and we still have to play against BFC, who are just in front of us. So a lot to play for. We have to secure full points in the last two games,” Coyle added.

Meanwhile, for Mumbai, it’s about their AFC Champions League qualification spot. Sergio Lobera’s side was unstoppable in the league before they witnessed a slump, that saw them win just once in the last five matches. It cost them the top spot to ATK Mohun Bagan which put them in a similar situation as JFC – wherein they would have to win their last three matches.

Lobera, however, maintained that his side would need to improve in certain aspects. “I feel as always we need to work and continue improving in some aspects of the game,” he said. “We had a lot of chances to score. The most important thing is to know that we can improve. We need to put our focus on our future game. If you need to win a game, you need to play as a team.”