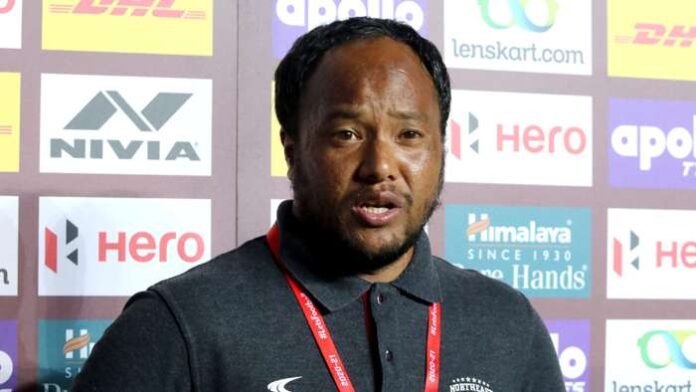 Northeast United FC assistant coach stated that their recent success with new interim manager Khalid Jamil was due to the fact that they have tried to strengthen their principles, rather than change their game a lot. The ‘Highlanders’ are currently placed at the fifth spot on the league table.

Northeast United FC were slipping away from the championship race during the mid-season, while a string of poor performances saw their head coach Gerard Nus being sacked from his services. Khalid Jamil was appointed as the interim coach of the side and their fortunes have taken a turn since, having won three and shared points in their last five matches. The Highlanders’ assistant coach Alison Kharsyntiew revealed that they haven’t tried to change their game a lot, but rather strengthened their principles.

“We haven’t changed a lot. We have only tried to strengthen our principles – to be more disciplined in defence and more creative in attack. Coach Khalid has been working very hard with the players, especially in encouraging the young players,” said Alison Kharsyntiew, ahead of their match against Odisha FC.

Throwing light on the upcoming game, Alison was swift to point out that the match against Odisha FC is not going to a cakewalk, reminding of the late comeback during their 2-2 draw against Kerala Blasters FC a couple of days ago. A win will take them to the third position in the league table, two points ahead of Hyderabad FC.

“They have done very well in the last game against Kerala Blasters (2-2 draw). We have to go in the match with the right mentality and give our best to win the game. We go there with a very serious attitude to show that we are hungry to win. That’s our only objective,” added the manager.