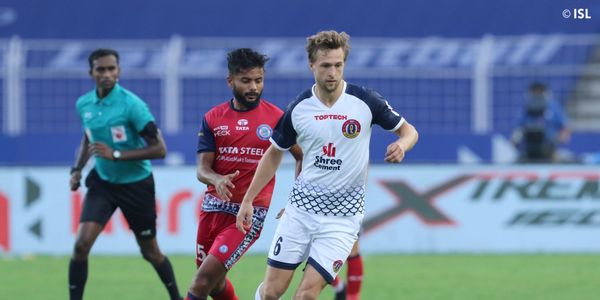 Odisha FC interim coach Gerald Peyton stated that the 2-2 draw against Kerala Blasters FC in the previous match has given a lot of momentum going forward. The Irishman specifically lauded the efforts of new recruit Brad Inman, saying that he was pleased with the way he has played since his arrival.

Attending the Pre-Match Press Conference ahead of Odisha FC’s next game against NorthEast United FC, Interim Head Coach Gerald Peyton has stated that a 2-2 draw in the previous game against Kerala Blasters has given the team a lot of momentum to carry on in the remaining matches of the ongoing seventh edition of the Hero Indian Super League (ISL).

“I was really pleased for Brad Inman to come in and do things that we needed. There was a lot of good things that happened. I am still waiting for Paul (Ramfangzauva) to be fit. Manuel (Onwu) comes back in and Bora (Gaurav) will come back in. We should have five players fresh for this game because we have got Goa in three days’ time. Keeping people fresh and ready to give everything is on my mind as well,” the Interim Coach further added.

When he was asked about Coach Khalid Jamil’s role in the opposition camp, the former Arsenal Coach opined, “Since he has come in as the new manager, he has done a great job. They have had good results and yes, he has done very very well. We know it’s going to be a difficult game.”

“We are going to go there to make it difficult for them because we have got nothing to lose now. We have got momentum from the Blasters game to go on, we have got belief. We scored two fantastic goals against Blasters, some of our combination play was very very good. We are going there with a very positive mind and with the confidence and momentum to win the game.”

With plenty of experience under his belt, the 64-year-old Coach has come to India for his first assignment. Speaking about his experience in the ISL so far, he said, “I think the package of the League is good. Everybody has good foreign players in the league. But, what has really impressed me is the Indian players especially at the top clubs. The Indian players are starting to improve on the ball, vision, passing, keeping the ball, attacking skills, dribbling skills. I think how it’s being developed now it’s going to be successful. Over the next 5-10 years, it’s going to be very successful for Indian players.”

Odisha FC had signed midfielder Brad Inman from ATK Mohun Bagan in January and he has started to make his presence felt on the pitch for the Bhubaneswar-based side. He accompanied Coach Peyton for the Press Conference today and mentioned, “Very different styles, both (OFC and ATKMB) have their positive ways and I have enjoyed working in both the clubs. When I signed we were working under Stuart (Baxter) but with Gerry (Peyton) stepping in now I can learn from him and I look forward to the last four games working under him.”

The Australia-born Scottish footballer registered his first assist for Odisha FC in the last game as Diego Mauricio scored the goal. Asked about his partnership with the Brazilian forward, Inman replied, “From the first day, in training, we linked up well and it is good that we performed well in the last game.”

He concluded with a message for the Odisha FC fans. He said, “Just stick with us. We have got four games and we want to be competitive in all four. Hopefully, we can get some points for you all and you can celebrate.”