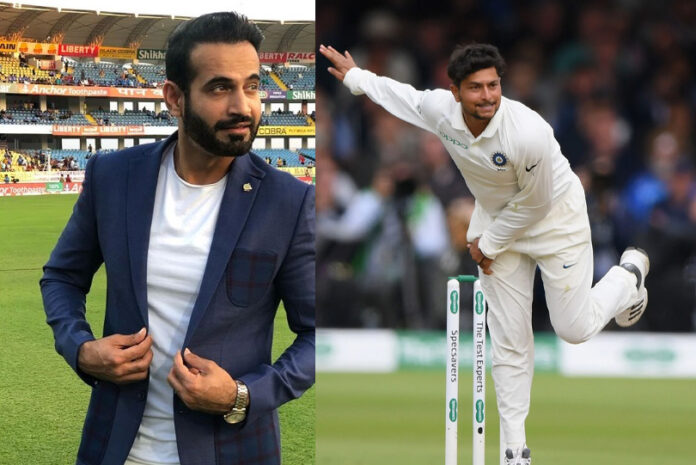 Ahead of the first two Test in Chennai, Irfan Pathan has stated that he is pretty sure Kuldeep Yadav will perform well whenever he gets a turn in the series. He also insisted that England’s history against leg-spinners and Kuldeep’s abilities could end up tilting the decision in his favour.

Despite his fifer against Australia in 2018, at the iconic Sydney Cricket Ground, Kuldeep Yadav has been left out of the playing XI over the next two years. The management instead has preferred Ravichandran Ashwin and Ravindra Jadeja as the two main spinners away from home. Even in their absence, the management’s decision to trust Washington Sundar has left Kuldeep and his place in a spot of bother.

However, that hasn’t changed Irfan Pathan’s stance on the left-arm unorthodox spinner. The Baroda all-rounder stated that he’s pretty sure Kuldeep will do well whenever he gets a turn in the Indian Test jersey. He also added that it’s the management’s integral duty to back the players even if their form is on a decline.

“He is a unique bowler. The guy is about 25-26 and this is where he is going to get maturity. Whenever he gets opportunity, first Test, second Test, whenever he will be raring to go and I am pretty sure that he will do well,” Pathan told PTI, reported TOI.

“I am sure they must be supporting and backing Kuldeep Yadav because he has got immense talent. You don’t find left-arm wrist spinners on every-day-basis.”

“It is very important from the team management point of view, how they keep mind-set of a player, who is not playing. I am sure they must be doing a right job, and that’s why the guys, when we saw some of the youngsters, they came and played really well,” Pathan added.

Pathan also hinted that there could be a possibility that India could feature a three-man spin-attack for the Chennai Test, with the venue’s history favouring the spinners.

“It depends on the wickets but there is a high chance in Chennai they play three spinners because we see how Chennai pitch can really help the spinners with that extra bounce as well and the soil, which is very conducive for spin bowling,” he elaborated.

The former Indian all-rounder also cited England’s history against a spin attack, stating that they are naturally more vulnerable, boosting Kuldeep’s case of featuring in the Test.

“When it comes to England, look at the history, if you are a leg-spinner, you always have a chance of performing well, I just hope that whenever he plays, he does really well and he does,” he concluded.