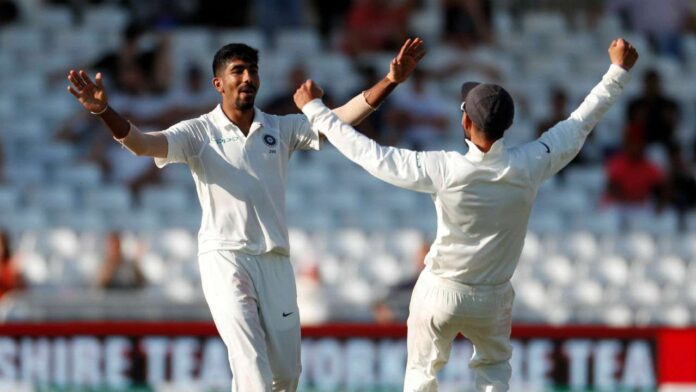 Jasprit Bumrah, who on his home debut today picked two crucial wickets to keep India in the contest, asserted that he does not rely on crowd noise for energy and stated that he needs no bigger motivation than representing the country. Bumrah toiled hard to finish with figures of 2/40.

After 17 Tests of playing on bowler-friendly wickets, Jasprit Bumrah encountered a flat wicket on his home debut in Chennai today, but the right-armer toiled hard and got his rewards. First, on the stroke of lunch, Bumrah trapped Dan Lawrence plumb in front with a booming reverse-swinger then, in the last over of the day, he produced an encore to dismiss a well-set Dom Sibley. Bumrah had, incidentally, played each of his first 17 Tests in front of spectators, and the first Test today at the Chepauk was his first-ever red-ball game behind closed doors.

However, speaking in the press conference post the day’s play, the 27-year-old asserted that he is not someone who is affected positively or negatively by the crowd. Bumrah stressed that he does not need crowd cheers to push himself to go the extra mile and asserted that there is no bigger motivation than representing the country in the longest format.

“For me, I don’t need extra noise or something to push myself. It depends on individual to individual,” Bumrah said in a virtual press conference on Friday.

“I actually keep telling myself if I don’t bowl well, how can I pick wickets. There isn’t a bigger motivation than playing for India, this is the best format and my favourite too. I accept all kind of results having done my best. I keep getting better and taking advice from others in order to improve myself.”

It was a day where not just Bumrah, but the entire Indian side had to toil hard. After picking the wicket of Dan Lawrence in the 26th over, the hosts went 64 overs without a wicket, before Bumrah finally struck three balls before stumps. The speedster acknowledged that the ball got scuffed up due to the wicket’s flat nature but insisted that India will look to utilize their resources efficiently to punch holes in England’s batting.

“This is my first match in Chennai, there wasn’t a lot of lateral movement. The ball got relatively scuffed up early because of the flat pitch. We aren’t complaining about the pitch but aiming to make full use of the resources and bowl well in the coming days.”

Wickets like these are, of course, by no means alien conditions for Bumrah, who played close to 25 first-class games in similar conditions across the country prior to making his Test debut. Having already picked two vital wickets, the right-armer expressed satisfaction over his performance but attested that on Day 2, he will be focused on bowling England out as cheaply as possible.

“For me, I have played in India but first Test in India, I have played a lot of cricket in India. It’s not completely alien but that being said done, I was happy with my efforts on such conditions. My main focus is what I can do for the team tomorrow and help the team dismiss England quickly.”