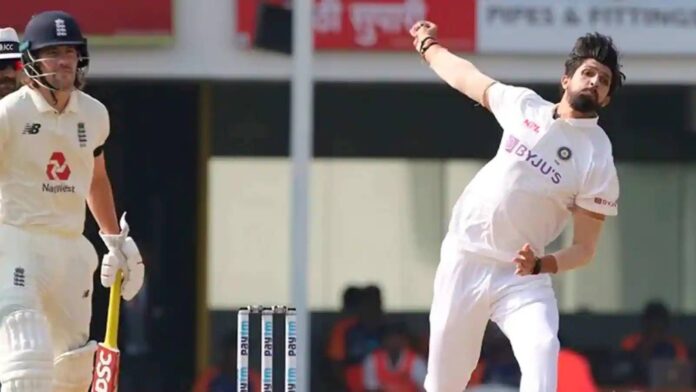 Ishant Sharma, who entered the 300-wicket club, stated that he doesn’t really have his sights on records and achievements of overtaking Zaheer Khan, with the focus just on improving his game. Recalling his spell to Ricky Ponting, Ishant stated that his only aim was to pin him under pressure.

Since debut, Ishant Sharma has become the sole and binder of the Indian bowling unit, after he took over the reins from Zaheer Khan. Ever since then, the pacer has been consistently threatening the batsmen with his bowling performances, combined with his height and length. However, there was a period that followed where he struggled to pick wickets, with his inconsistency over his line and length.

Post the Jason Gillespie episode, the pacer has turned his career around, fast becoming one of the best pacers in the world. In the ongoing Test against England, the pacer picked up his 300th Test wicket, with the wicket of Daniel Lawrence, who was caught right in front. However, despite getting to the landmark, Ishant Sharma stated that he doesn’t really think about records or achievements.

“I don’t really think about overtaking Zaheer Khan or anyone on the list of any record. I don’t think about all these records, just focusing on improving myself and my bowling efforts. Just want to enjoy my cricket and keep playing for India and helping the Indian team,” Ishant Sharma told Ravichandran Ashwin in a video posted by BCCI.

Talking about the spell that he bowled to dismiss Ricky Ponting, the lanky pacer stressed the importance of bowling a lot of deliveries, outside the off-stump channel, consistently putting the batsman under the pump. He revealed that a piece of advice from Sachin Tendulkar was to be as patient as if the pacer was bowling in the country.

“I have bowled plenty of spells (like the one I bowled against Ponting) in first-class cricket. What happens in first-class cricket is constantly you have to keep working hard to get a wicket. You have to keep bowling maidens to tie the batsman down and that’s what Sachin Tendulkar told me in Australia. He just wanted me to be as patient as I’m playing in India,” he added.

Ishant also recalled his first-ever wicket in the longest format, with the pacer picking up Bangladesh all-rounder Mashrafe Mortaza as his first scalp in the Indian whites.

“The first wicket was Mashrafe Mortaza in Bangladesh, it was my debut and there wasn’t much crowd there as well. Anil Bhai (Kumble) held the catch in the gully, that was my first wicket.”