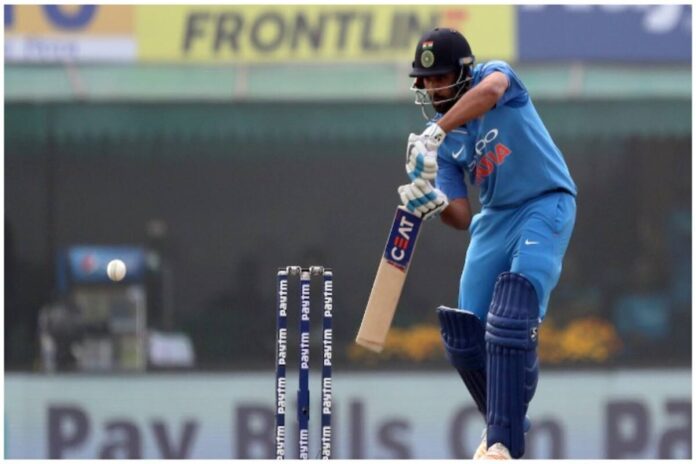 In a day that was arguably dominated by Rohit Sharma, who scored an immaculate daddy hundred, there were plenty of talking points – right from England’s torrid plans to Ajinkya Rahane’s monk-like innings. India ended the day on a total of 300/6, after winning the toss and choosing to bat.

After missing out two innings in a row, there was undoubtedly the noise around that India should skip Rohit Sharma for the second Test. But that was just noise, as the right-hander showed the right quantity of intent required on the first day of the second Test. Prior to the first Test, he had scores of 44, 7, 26, 52 but never converted his start into a big score. Similarly, in the first Test, he threw away his wicket on a decent surface, with nothing of a shot against Jofra Archer – scoring just six. In the second innings, there was the turn and bounce, which beat him all ends. So England should have ideally worked his weakness out, right?

That’s where England got it horribly wrong. After the first spell from both Stuart Broad and Olly Stone, where they targeted Rohit’s weakness, trying to exploit it, it was a no-show from the others. Ben Stokes’ spell arguably tilted the game back in India’s favour, gifting rather than giving them momentum going into the second session of the day. His mid 120s and high 120s short-balls were never going to irk out Rohit, with the Indian averaging 66 and 5 rpo against such deliveries, as per CricViz.

Neither was Jack Leach’s deliveries which pitched inside Rohit’s bat, which he could smash all day to the boundary ropes, with CricViz reporting that 116 runs off his runs have come off sweep shots. In between deliveries which troubled the right-hander, there were plenty of them which let him loose. That might very well turn out to be the deciding factor in the Test, as England ended up conceding 4.1 runs per over during the first session. From thereon, he just went on to score a 150, nothing much before England got him to play a tired shot.

Jack Leach and Moeen Ali pay dividends to the credence

Even after Dom Bess ended up with five wickets in the first Test, there was always the element of inconsistency attached to his bowling. Not just that, England management’s decision to rotate their bowlers has been a real talking point of the series thus far. Even when they didn’t have their best pacer – Jofra Archer – they replaced him tad easily with Olly Stone, who showed an immediate impact. But the fact they trusted Jack Leach with his second straight Test showed their think-tank has been immaculate and on point. After they lost the toss, it was immediately visible that their spinners had to make an impact on the first day to avoid a long day in the field for the Three Lions.

Barring the odd full-length deliveries to Rohit Sharma, the two spinners worked excellently in tandem. While Leach took up responsibility and leadership, Ali showed immensely that he could bowl all day with the same tenacity. Since Mitchell Santner, according to CricViz, no left-arm spinner has dismissed Cheteshwar Pujara twice before Leach walked out to bowl. Leach consistently hit the marks that popped the ball up and down but also planted doubts into his mind, which eventually resulted in his downfall. That and in the very next over, the Birmingham spinner accounting for Virat Kohli turned the momentum in England’s favour. The decision to trust the two spinners has paid dividends excellently on the first day.

The talks were pretty clear – Rahane was pretty much under the pump and couldn’t stitch two innings together consecutively. Post his century in Melbourne, where he scored 112 – he has had five failures – of his own standard where he has had starts and then, gave up on it to make life so much difficult for the others. Most of the times, it has been his restlessness and at the other times, his extravagant shot-making nature, which has led to such dire times. After the first Test, where he ended up with a duck and one, everyone criticised him, rightly so as well. However, as Virat Kohli had mentioned time and again – Rahane is an integral part of the Indian team.

“I’ve said this many times in the past as well – along with Pujara, he [Rahane] is our most important Test batsman and he is going to continue to be,” he said in the post-match press conference in Chennai. When he walked out to bat, India were in dire straits, with three wickets down pretty much in the first session of a good batting day. He was just immaculate. First-up, he had survived a session of Olly Stone’s bowling, where the ball was reversing well and at a great pace. But later one, when the spinners came on, he had to put on his dancing shoes, work them out and hit the late cuts, to his half-century. If this isn’t one of the knocks that would stand out amidst the rest, then none would, such is Ajinkya Rahane’s experience, when the pressure is on him – he always does perform.