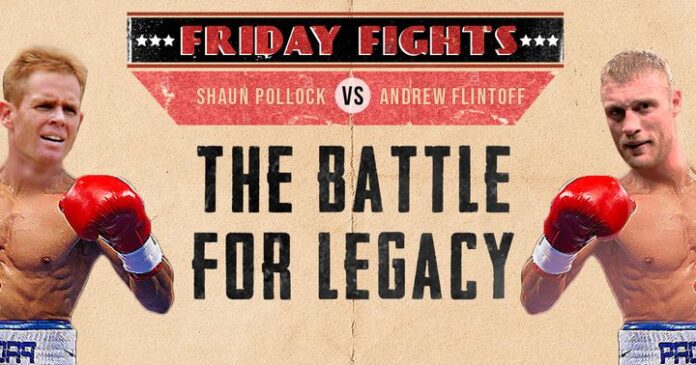 Two mavericks of the game, Andrew Flintoff and Shaun Pollock were the go-to-bowlers for their respective countries and on their day, could contribute in an efficient manner with the willow in hand as well. Today, these two resilient cricketers will lock horns in an epic boxing bout.

Those who have seen the princely peak of Andrew ‘Box-Office’ Flintoff still can’t stop but gush at his maverick ability to change games of cricket with his power packed performances.  6 ft 4 inches tall, ability to clock 90mph, reverse the ball at high pace, get the big fishes out, unleash powerful batting performances at the biggest of stages, Flintoff was a revered artist in the world of cricket.

If Flintoff was an artist, Shaun Pollock was a machine. Hailing from a cricketing family with some big names, yet being able to turn out the best of all, pressure was something that he always created than succumbed to. One of the premier new ball bowlers during his heydays, he was a match-winner with his impeccable accuracy that he used to perfection to make batters dance to his tunes. Also, he was a very solid lower-order batsman, who could chip as and when the team required.

Today, these two phenomenally gifted players will don the boxing gloves and take on each other in a head-to-head boxing battle to go one up on each other and emerge as the ultimate champion. Let’s get started, folks:

Flintoff is off to a flyer. Known as a quick starter, he gets on to the front foot, and creams his punch like a cricket ball to down Shaun Pollock in the opening round of the much anticipated battle. The English showman’s batting average of 32.02 is too hot to handle for Shaun, who averages 26.46

ROUND 2 -> BOWLING AVERAGE: So close yet to so far

Shaken up by Flintoff’s punch in R1, Pollock shows he’s a resilient man. This time, he takes the initiative and goes for a series of attacking punches on the Englishman. But, Freddie was no muck with the white cherry in hand, and with an average of 24.38, he takes all the punches in his stride before unleashing an aggressive hook to win the round over Pollock, who averages 24.51 with the ball in a close clash.

ROUND 3 -> WICKETS PER INNINGS: Freddie, the PRO BOXER turns up

One of the most critical aspects of boxing or cricket is how you use aggression to your advantage. And Flintoff, who has been a pro boxer himself, apart from being a cricketer, surely knows how to translate aggression into uppercuts. And this time, he doesn’t even let Pollock to lay his finger on a bull like Freddie as with 1.42 wickets per innings, he’s too big an impact bowler to even get challenged by Pollock’s 1.32 wickets per innings.

ROUND 4 -> ECONOMY RATE: Sigh! Pollock is finally on board

Much to the relief of the crowd present in the stadium, who have come to witness an enthralling battle, Pollock is finally off the hook. Flintoff, with an ER of 4.40, gets a tad too aggressive and as a result, in a bid to repeat his uppercut from the last round tries to replicate the same and gets imbalanced. All that Pollock with an economy of 3.68 needs to is to connect his punch accurately which he does with the ease of a master as such was his ability with the ball too.

ROUND 5 -> BOWLING AVERAGE IN ICC TOURNAMENTS: This is Freddie’s world

Big ticket tournaments, pressure, box-office environment, the world is watching, and it’s hardly a surprise that Flintoff turns up the heat and packs a punch. It’s a no-contest as Pollock lives up to the ‘C’ tag and turns out to be an underperformer in the ICC tourneys. Flintoff’s bowling average of 21.47 is far better than Pollock’s 27.46 in big ticket ODI events.

Shaun Pollock has largely under performed in this fight thus far, but he makes a comeback with a thumping win this round. This turns out to be the last man standing sort of contest. Both the fighters go hard at one another. No one is ready to give up. But Pollock with 52.9 balls per game lasts longer as Freddie with 47.2 balls fails to keep fighting and loses the round.

ROUND 7 -> BOWLING AVERAGE AT HOME: Jeez, Pollock is up and running now

That’s the beauty of fights between two talented boxers. No matter how dire the situation becomes for any of them, they keep gutting it out till the last ounce they got. And that can be said for Pollock too who at one stage was trailing 1-4, as he registers back-to-back wins. Making full use of the momentum that he gained after R6 win, Pollock brings up a surprise move- THE RIB CAGER. With an average of 20.20 at home, he tears into the rib-cage of Flintoff, who loses the round with an average of 21.32.

ROUND 8 ->BATTING AVERAGE AWAY: You can’t keep a pro boxer out for long

Now, this is where the experience of being a pro boxer once comes into play. Flintoff knows how to turn the tide, be it with the bat in hand or the boxing gloves. Pollock, buoyed by his last two round wins, with an average of 24.34, tries to hook Flintoff to the ground but the Englishman ducks and later with 27.11 overpowers him with a killer uppercut. Crowd goes berserk, what a move Freddie boy.

ROUND 9 -> BATTING STRIKE RATE: And the big man Flintoff knocks out Pollock

This was always coming. Pollock, after a great R6 and R7 lost the last round, which meant he had to fire with all his guns blazing in R9 to fight for another day. But Freddie was always a great striker of the cricket ball with his hand-eye coordination and that is what he uses to perfection in boxing as well. With a strike-rate of 86.7, Pollock tries a half-hearted punch but Flintoff, with a strike-rate of 88.82, steals the thunder with a HOOK to down Pollock for once and all.

Let us all admit that we did expect Andrew Flintoff to turn up the heat in this bout but could anyone anticipate the fight not even being a close one? I, for one, didn’t as such were these big names and the stature and respect that these two command. But Flintoff was like a relentless machine and kept taking his game to the next level with every subsequent round. Pollock did try to find his feet later on but it was too little and too late. But one thing which we all learnt today is how good Andrew Flintoff is, as he emerged as the ultimate champion in this clash of titans.