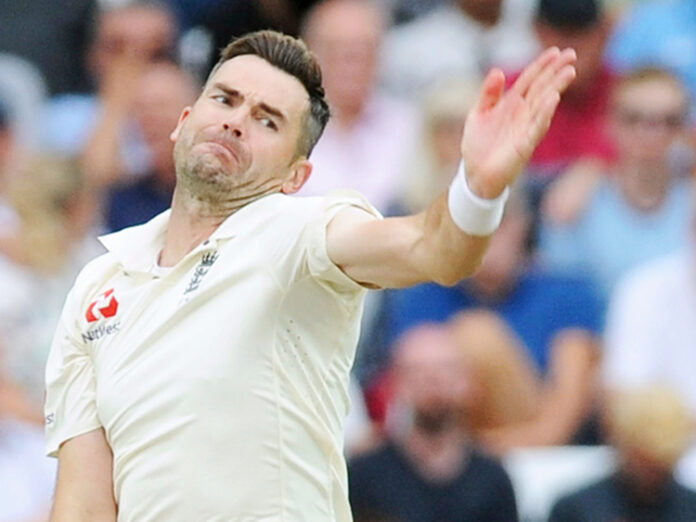 England’s James Anderson, who is primed to play the third Test after being rested for the second, conceded that he doesn’t expect the pink-ball to reverse and admitted that the red-soil-wicket could end up providing turn. Anderson further hoped for the Motera pitch to provide carry for the seamers.

A 38-year-old James Anderson ran through the Indian middle-order in the first Test to hand England a famous win, and he did so with the help of a major weapon in the form of reverse swing. On the red-soil wicket in the first Test, Anderson got the ball tailing-in viciously and made life hell for the Indian batsmen, who eventually succumbed to the veterans’ mastery. Anderson was rested for the second Test – in which, incidentally, there was not a tinge of reverse – but the Lancashire man conceded that he and his side do not expect reverse swing to play a part in the third Test, which will be a pink-ball encounter.

Speaking ahead of the Motera Test, the 38-year-old claimed that pacers are ‘unlikely’ to find reverse swing in the third Test and revealed that he came towards such an assessment after bowling in the nets.

“I think we will be unlikely to see reverse,” Anderson said ahead of the third Test, reported ESPN Cricinfo.

“It depends on the pitch – if the pitch is really abrasive you might see a bit of reverse, but from how we’ve bowled it in the nets I would be very surprised if it does reverse. It may well stay a bit harder for longer. We’ll have to wait and see how it reacts after 40-50 overs.”

On the first look, the Motera pitch looked greenish, but, despite that, owing to the wicket being prepared with red soil, Anderson suspected that the pitch could very well turn prodigiously. The 38-year-old further hoped for the wicket to provide some carry for the pacers, in the wake of the first two Tests offering no bounce and carry.

“I saw the pitch over the last couple of days and it’s got a lot of grass on it but I can see a lot of red soil underneath which says to me it could well spin if they take a bit of grass off. All the seam bowlers want really is a bit of carry, which we haven’t really had throughout the series. We’re keeping our fingers crossed there’s a bit more in it for the seamers.”

Historically the pink-ball tends to assist seam, and owing to the same, pacers get carried away, often trying too hard to bowl the ‘magic ball’ to get the better of the batsman. Wary of the harm impatience can do, Anderson asserted that the English seamers will bowl in accordance with the conditions and insisted that they will only attack aggressively should there be plenty of help on offer.

“I don’t think we’ll bowl any differently to how we normally bowl with the red ball. We’ll be assessing conditions as we do and bowl accordingly. If it’s swinging around we’ll be more attacking, bowl a fuller length, have extra catchers in. If not, we’ll go a little bit more defensive.

“It’s all about assessing the conditions. We’ve got a couple of balls that are really old we’ve been practising with that are doing absolutely nothing and I think it’s important we do that because you still need the option of taking wickets when it’s not swinging around.

“We’re trying to cover all bases and know what we’re going to do if it doesn’t swing. If it does swing, yes, potentially we’ll bowl those slightly more attacking lines and lengths.”

Now 38, Anderson was rested for the second Test to manage his workload – despite being the match-winner in the first – but the veteran is expected to be in the playing XI for the third Test. The legendary speedster revealed that the management asked him to sit out the second Test in order to give him the best chance of being fit for the pink-ball encounter.

“The idea was if I missed that one, that would give me the best chance of being fit and firing for the pink-ball Test,” he said. “So that’s where I am at, at the minute: I am feeling good and fresh and ready to go again if called upon. It’s hopefully going to keep me going for longer, and Stuart [Broad] has said the same too.”