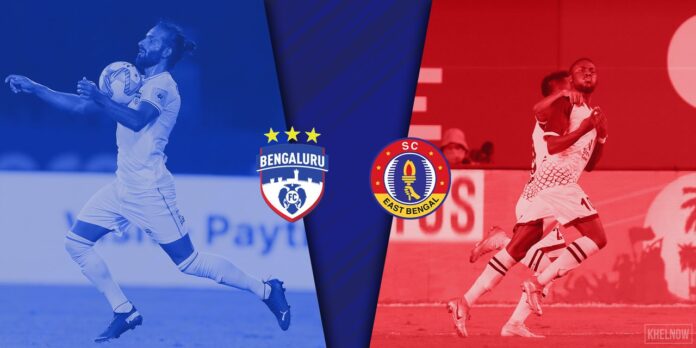 The 16th matchday of the Indian Super League (ISL) will see SC East Bengal locking horns with Bengaluru FC at Tilak Maidan in Goa on 2nd February.
The upcoming match of the ISL will be played between the teams that are currently placed in the bottom half on the table. SC East Bengal is currently sitting at the second last position on the table, with 13 points to their name. Their previous game against Goa FC resulted in a draw as both sides registered a single goal on the board. East Bengal’s attacking duty is on the shoulders of Jeje Lalepekhula and A. Pilkington, with Dylan Fox and Rana Gharami handling the defending side.
With 3 wins and 6 draws in 14 games, Bengaluru FC is currently occupying the seventh position on the table. Their previous encounter against Hyderabad FC resulted in a draw as both sides were able to post 2 goals on the board. Cleiton Silva, Sunil Chettri and Udanta Singh are currently handling Bengaluru’s attacking lineup, with L. Augustine and Erik Paartalu being given the midfielder’s role.