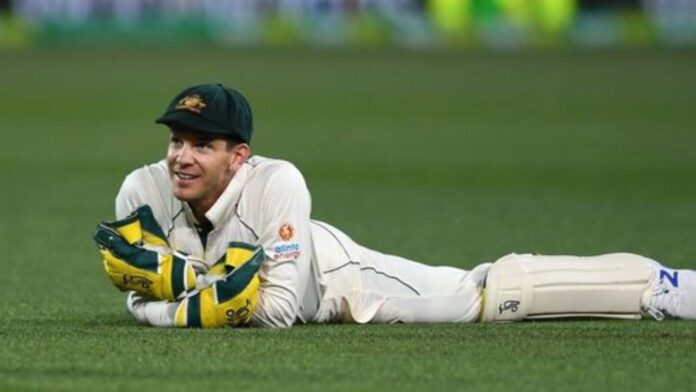 The Suite Life of Zack and Cody was really fun, right? You could do anything and get away with it without being grounded but this isn’t about Zack or Cody, it’s about the most wanted job in the entire world – Australian skipper. This role often comes with premature greying of hair, more than allocated hours of work and requires you to have the best of yoga sessions to survive the storm.

Before 2017, Paine had neither and now he is surrounded by it, with the job on the line and the respectable figure under the scanner. He’s no more a young kid on the block and equally, he hasn’t yet established his seniority amongst the noteworthy. “Come to the Gabba mate” didn’t quite work right but so didn’t his decision-making throughout the series, at one point where everyone wondered if he was the right fit.

Even the calmest of Justin Langer could not outlive the frustration that seeped through – were Australia that bad or were they outdone by their own intricate ideologies? The hosts were never down and out in the series and never had conceded the game to the opposition yet the scoreline will read the opposite – they conceded back-to-back Test series at home to India.

From becoming the best skipper in 2019 to not even getting the support of being the best wicketkeeper in the country, Paine’s ride has been quite bumpy, to say the least! Paine had two ways to play the game – go all-out ultra-aggressive or go nut-nutty into a nutshell. Either way, one or the other he employed often got the better off his tactical side, which has inevitably become non-existent. Or at least, till the end of India series, it looked that way.

Every one of his tactics were met with a counter-punch from Virat Kohli and in 2018, he ended up looking like a guy with no real support and result. But it was justified as Australia didn’t have the batting firepower, with no Smith and Warner. But in 2020, they had Warner, Smith, Labuschagne and several other stars, who didn’t show up. This is where it got a bit tricky for Paine, who was left absolutely in shambles with his bout of frustration. The words stemmed as a result of the emotion and both of them got the better of his performance.

While there was India, on the other hand, who patiently waited for the chances and pounced upon them as if it were a sale, there was Australia, who were handing out starts, leads, and, more importantly, games. Every time the hosts suffered, the camera panned at the painful Paine, who looked terribly dejected and sorrow-faced. His tough exterior tried to paint a rather different picture but it was easily deducible. Jump to Leeds 2019, Australia, on the verge of completing a series win against England, with just one wicket left.

You’d celebrate, right? Not under Paine’s watch at least, this Australian team has won several games, hearts but not clutched it out when it required the most. The fact that they had not been put under the spot by New Zealand and Pakistan was just flat out shattering. They had a dogged belief but didn’t quite put it on show, they had the character but never came out when required. If anything, this summer, the Australian team looked waiting to gift the opportunities and India more than obliged and took them all.

In Adelaide, it was indeed a masterful innings from Paine to take Australia closer to India’s first innings total but what made them chase it in the first place? A freakish run-out, otherwise they would have ended up conceding the game before the curtains were dropped down on Day 1. Similarly, on Day Four, they had a freak show and suddenly, the praises started flying in the window and out went the criticism. There was never the doubt of how he utilised the bowlers, not even an iota of how India found themselves in prime position only to surrender a lead.

But at the end of Sydney, there he stood, shell-shocked, not because he didn’t know it was on the cards but because he expected the Leeds incident to be a one-off incident. Playing the wrong line, bowling the wrong length and employing the wrong tactics – all of them are equally cynical and Paine just did it all with his captaincy. He wasn’t inspired, he wasn’t fearless but he was timid, lacklustre and tried to portray enigmatism. Bouncers didn’t work but he didn’t care, that was always the plan that was destined to succeed, so he continued on and on and on till he found out eventually found out it didn’t work.

However, he insisted that it was a rare failure for the tried plan and they came out yet again, at the Gabba, bouncing India. The result was the same. In fact, if anything, the result was a mirror of how horriblee the tactics employed were, it isn’t easy being Paine but it isn’t easy to believe that two Tests don’t teach you a thing. In between an ultra-attacking bounce-out-opposition and highly-defensive-put-your-fielders-on-the-ropes, Paine was found wanting, he didn’t have a tactic, he couldn’t fly on the move. He was no more the miracle worker that succeeded in England.

Leeds wasn’t an indicator, it would now go on to become a trademark of this Australian team, under Paine’s leadership. Moments gone, moments withered and by the time they learnt, they wanted to try the same thing again only to fail. When things didn’t go his way, he would put his mouth to the task and when neither worked, he would end up whining about the time-wasting tactics employed by India. But it wasn’t that, it wasn’t about the words, the whining or even the frustration – it was about how he set up the team.

The signature of this team would always be that – running away from reality and lacking ambition, self-belief and taking the others to the cleaners. Paine wasn’t ever a front-runner for the job in the first place but the circumstances under which he took over, there couldn’t have been a better leader. But as time has progressed and the team has evolved, his tactical nuances which at one point briefly yielded results have now turned the ship awry. Australia always fought to hold on, be it batting, bowling or fielding but this series, they have been defensive, monotonous and resultless.

He might strike a stoic face and possess an enigmatic personality but as long as the results continue to be an action-repeat of past failures, his quote will always die a slow death, with irony beside.