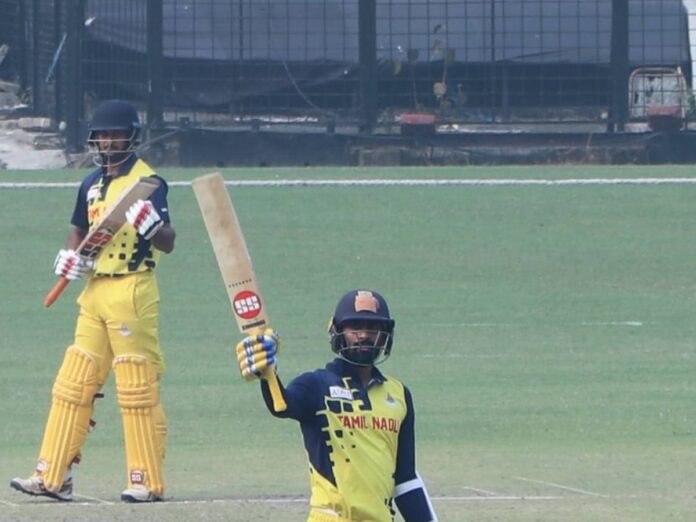 Tamil Nadu opener N Jagadeesan, who is the second highest run-getter in the ongoing Syed Mushtaq Ali Trophy, revealed that spending time with Mike Hussey during the IPL helped him get clarity and fine-tune his batting. Jagadeesan further spoke of the surreal experience of playing alongside MS Dhoni.

Narayan Jagadeesan entered the 2020/21 Syed Mushtaq Ali as a capped IPL player, but while his talent was well-known, few expected the youngster to tear the league apart like he has. With two games left in the tournament, Jagadeesan stands tall as the second highest-run getter in the tournament, with 322 runs at a remarkable average of 107.33, and a week ago he equalled the tournament record for the most consecutive fifty-plus scores (4). Jagadeesan has been the single biggest reason for his side Tamil Nadu’s unbeaten run in the competition, and with them having booked their place in the semi-finals, the state side have pinned their hopes on the 25-year-old to take them all the way.

Unlike previous years, Jagadeesan, this season, has struck the fine balance between aggression and consistency and this has reflected in his numbers, with him, to go along with his average of 107.33, striking at an astounding 147.70. Speaking to ESPN Cricinfo, the wicket-keeper batsman revealed that it was time he spent with Mike Hussey, the batting consultant of Chennai Super Kings, during the IPL, which helped him get a good measure of his batting.

“We’re not someone who’re totally dependent on power; we’re players who look more for timing and the gaps you get in the field,” Jagadeesan told ESPN Cricinfo of his experience with Hussey.

“Personally, it has been a great experience to have good conversations with Hussey and he’s helped me a lot. Moreover, you don’t get a lot of time to work on your technique during the [IPL] season. It’s more about the mental ability to handle the bowlers; the kind of ideas and clear thoughts you can get while playing. These are simple mental thoughts that he gives me and coming from a player from his stature, it has been good for me.”

Purchased ahead of IPL 2018 for his base price of 20 lakh, Jagadeesan warmed the CSK bench for two full seasons, but finally made his debut in IPL 2020, compiling an entertaining 28-ball 33 in his first ever outing. The right-hander’s knock was filled with sweeps and reverse-sweeps, notably against the leg-spin of Yuzvendra Chahal, who found Jagadeesan a tricky customer to bowl to. The Tamil Nadu man revealed that he went to the sweep because it was a shot which came natural to him.

“Before your debut, you ask questions to yourself : ‘do you belong here or can I score runs here?’ After the first innings, my confidence grew and it’s about carrying through. Sweep is also something I’ve been playing for a long time. Even in TNPL and first-class cricket, I’ve score a lot of runs with the sweep. So, it is something which comes naturally to me, I guess, so I don’t give a lot of thought about it. I just pick the right ball to be swept.”

Like many a young kid in the country, Jagadeesan, too, grew up idolising the legendary MS Dhoni, particularly given the fact that he, just like the Ranchi lad, was also a wicket-keeper. The CSK star gave a sneak peak into the advice Dhoni gave him prior to his debut, and further spoke of the surreal experience of sharing the dressing room with one of the icons of the game.

“He [Dhoni] did tell me since it’s an IPL match, ‘I don’t think you should be nervous right now and I think you should recall your first-ever game – how you enjoyed and you just wanted to play and express yourself’. Yes, it did help a great deal for me.

“Obviously, very special feeling because everybody idolises him [Dhoni], but not everybody gets to share the dressing room with him. So, extremely privileged and whenever I go and ask for any doubts, he’s always there to help and the door is always open. It’s not just about wicketkeeping, I also talk to him about batting as well. The way he’s off the field – jovial – it makes your life much easier.”

Last week, CSK confirmed that they were retaining Jagadeesan for the forthcoming edition of the tournament.