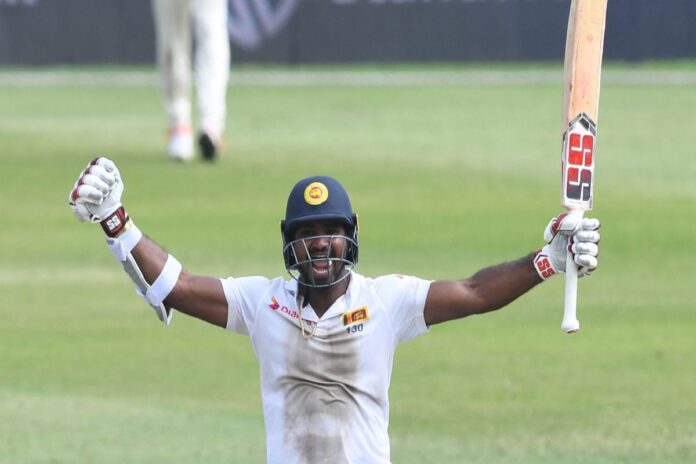 Welcome to our series where we bring you a moment, a game in history that has shaped the way the sport has been played, in our segment weekly ‘Throwback Thursday.’ This week, we go back to the Durban Test 2019 where Kusal Perera sent shock waves in the world helping Lanka to an unbelievable win.

It’s February 1, 2019, and we’re at the Kingsmead, Durban for the first Test between South Africa and Sri Lanka, playing a thriller amid a buzzing home crowd desperate for the Saffers to go for the final nail in the coffin. One man army, Sri Lanka’s talisman, the most unlikely hero, Kusal Perera, and Sri Lanka are a hit away from the win while all that Kagiso Rabada needs to do is take a wicket and it’s curtains for Sri Lanka’s quest for a remarkable win.

The match has swung like a pendulum from to and fro. Just when the match starts tilting in South Africa’s favor, Sri Lanka has shown mind-boggling resistance, or one should say Kusal Perera as he ain’t ready to give up no matter what may come but how can one man pull off this stunner? Before we explore that, how did we get to such a blockbuster-Esque climax in the game? Let’s find out the backdrop of the riveting tale.

South Africa was heading into the series with a dominant Test run. They had won eight of the last 10 Test series, losing only two that too away from home. The Saffers had overpowered heavyweights of the Test arena, India, and Australia, besides beating Pakistan at home in the last two years with 15 wins of their last 17 home Tests.

In comparison, Sri Lanka was seemingly low on confidence as in the last few months they had been whitewashed by England at home (0-3) while they received a proper thrashing at the hands of New Zealand and Australia respectively. They had lost six of their last seven Tests with one ending in a draw.

In their last series, they could merely take 18 wickets across both Tests and cross 200 just once. They were battered and bruised. To add insult to injury, their best batsman in the last three series, Angelo Mathews, who averaged close to 69, was injured with no other batsmen averaging even 36. In fact, Sri Lanka had won just three Tests outside Asia in the last 10 years, if their twin Zimbabwe wins were taken out. There was nothing in favor of Sri Lanka.

It was a battle between two highly unmatched sides, with Sri Lanka nowhere near close to the prowess of South Africa to even compete, forget winning, which no one in their senses even considered a real possibility. While Sri Lanka was a force to reckon with at home, in South Africa, after playing 13 Tests, the Asian side had a shambolic W/L ratio of 0.09 in having won just a Test with 11 losses, and a draw across five tours.

Cut to the first Test, Sri Lanka gave early jolts to South Africa after putting them to bat as they were reduced to 17 for 3 with top-class bowling from Vishwa Fernando. But Temba Bavuma and Faf du Plessis first combined in a solid partnership which was followed by a typical Quinton de Kock knock where he blasted 80 off 94 to help the Proteas to 235.

However, nothing was going to be served on the platter to Sri Lanka as they had to face a daunting pace bowling attack comprising of Vernon Philander, Kagiso Rabada, and Duanne Olivier, with all of them averaging under 17 in the home Tests since the start of 2017 while the fourth seamer of the pace attack was arguably the greatest fast bowler of modern-times – Dale Steyn. On the expected lines, South Africa got Sri Lanka bundled out on 191, getting a lead of 44 with Steyn hunting four wickets. South Africa batted brilliantly in the third innings making 259 on the back of fifties from du Plessis and de Kock, setting an unlikely target of 304 runs to chase.

Never in the history of Test cricket in South Africa, barring the hosts themselves and Australia, had any team successfully chased down 300 or more. And to expect it against a rampant South Africa bowling attack with the tourists struggling was like expecting Virat Kohli to be emotionless on a cricket field.

After a decent 42-run start by openers, Sri Lanka was soon reduced to 52 for 3 bringing the first innings half-centurion – Mathurage Don Kusal Janith Perera to the crease. He started like a don too as he hit a lofted drive facing his seventh delivery to make his no-nonsense attitude apparent to South Africa. But a good looking partnership between him and Oshada Fernando was broken by the veteran Steyn who took two wickets in space of three deliveries to send Sri Lanka on the back foot at 110-5.

But Perera was ready to bat his guts out, counter all the challenges thrown at him by the home side and face all his demons to carve something truly magnificent. He was playing some authoritative shots on the square, cutting and hooking the ball as and when tested by the hosts. With single-mindedness, he was a man on a mission, who just needed some support to translate his chutzpah, trance mode into history for Sri Lanka.

Dhananjaya de Silva gave him ample support before the 96-run-stand was broken by Keshav Maharaj, who quickly accounted for wickets of Lakmal and Rajitha while Embuldeniya was bounced out. And suddenly from 206 for 5, Sri Lanka were 226 for 9, requiring 78, staring at a mountain to climb with only one thing looking possible- Perera’s century.

Meanwhile, Perera was in the middle of perhaps the knock of his life. But nothing was going to come easily, as it was South Africa after all, that too at their place and in front of their people. The fast and furious trio of Kagiso Rabada, Duanne Olivier, and Steyn had bruised him with two blows – one to his left hand, the other to his helmet. Not to forget, the southpaw was forced to retire hurt after sustaining a nasty blow on his helmet off Jhye Richardson’s bowling in Canberra just two weeks earlier.

More than physical pain, it’s the mental impact of such blows that derails a batsman’s mind. But Perera wasn’t scarred by what had happened in the past or was happening in the middle as all he could see was 304. He kept taking on the bowlers, hooking them for sixes, playing audacious reverse-sweeps and brought up his hundred soon.

He was very clear in what he wanted, even when eight fielders were on the fence, as when he felt like hitting, nothing could stop him. He was farming the strike, getting the big hits and South Africa was simply left helpless. With his bravado and top-notch skills, he kept going. He didn’t even spare Dale Steyn bowling with the new ball, an intimidating prospect. The Lankan batter hammered a Steyn length ball for a six, short-balls by him and Rabada for a six each, and was dealing in sixes.

With the team needing six, and Perera on strike, Rabada was the last throw of the dice by Proteas as the batsman who had already hit five maximums, was just a hit away. With only six runs made by No. 11, Perera had scored the bulk of runs in the 72-run partnership up to that point.

But South Africa was also just a wicket away with their trump card having the ball in hand. For all we know, there have been numerous instances of batting teams pulling out all the magic in the middle only to fall agonizingly short. Will that be the case today with Sri Lanka? Will Rabada knock over Perera and floor him with a jaffa like he has done in the past and savor a win to remember for a lifetime or it will be Perera, who has put all his blood, toil, tears, and sweat in the chase carving out history? Let’s see.