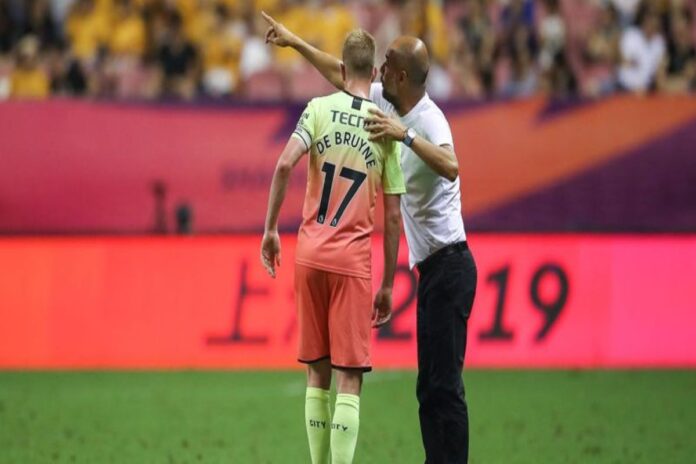 Pep Guardiola has revealed that Kevin de Bruyne is set to miss out on at least four to six weeks of action for the club after he suffered a hamstring injury against Aston Villa. The Belgian playmaker has played in all but one Premier League game this season and has contributed to thirteen goals.

When Kevin De Bruyne limped off before the 60th-minute mark against Aston Villa over the week for Manchester City, many fans feared the worst. Their fears were soon confirmed when Pep Guardiola revealed that the Belgian was set for his first long-spell on the sidelines this season. The 29-year-old has been one of the club’s key players this season and has missed just one game of league football.

Not only that, De Bruyne has contributed to thirteen goals, with ten assists to his name, and the Cityzens will have a tough time replacing him. Guardiola confirmed that the scans had revealed a hamstring injury and that the Belgian was set to miss between “four to six weeks” of action. He further added that the club now have “to find a solution” and need “to adapt” to the situation because “everyone in their own life is struggling” and City have to figure it out.

“The doctor said after reviewing the scan Kevin will be out for four to six weeks. It’s a big blow, but we have to move forward. I’m not saying anything that anyone doesn’t know – it is unfortunate for him and for us and we have to find a solution because everyone in their own life is struggling in the situation we are living in and we have to adapt,” Guardiola said, reported BBC.

The 2020/21 season has been extremely demanding on players, and clubs, with the schedule demanding for atleast three games of football to be played almost every week. That especially applies to clubs playing European football and it has seen the injury count rise as the weeks pass. It saw Pep Guardiola admit that “it’s impossible” to play every three days as the body will eventually say “it’s enough”. The Spaniard further added that player welfare is exactly the reason why managers have been demanding for five-substitutions in the league.

“To demand they are fit for 11 months, playing every three days, is impossible. With this amount of competitions, the body says ‘it’s enough’. The players don’t want to get injured but it’s no secret. When we demand five substitutions, it’s for this reason. Why can we do it in the FA Cup but not the others? I’m not just saying it because it’s Kevin, it’s too many games and competitions and in the end the players suffer,” added Guardiola.