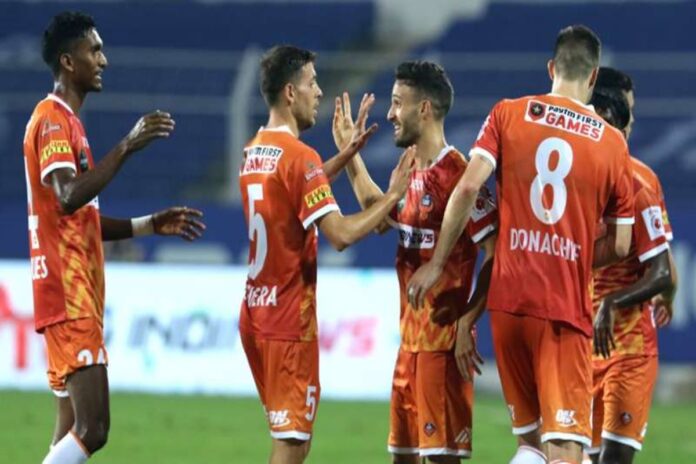 FC Goa picked up their fifth win of 2020-21 Indian Super League (ISL) as they beat Jamshedpur FC 3-0 at the Fatorda Stadium in Margao.

It was end-to-end play in the opening minutes which saw both sides fashion goal-scoring opportunities. Jamshedpur had an early opportunity to take the lead when they were awarded a free-kick outside the box. Aitor Monroy’s outswinging freekick into the box was there to be put in by Peter Hartley, but the skipper couldn’t get the right connection.

At the other end, Goa pressured the opponents and nearly broke the deadlock when Brandon Fernandes played Ortiz through on goal, but the latter’s shot was kept out by TP Rehenesh.

Noguera’s brilliance on the right saw him get past his marker, before squaring it to Ortiz, who fired into the bottom corner.

JFC had their best chance to level terms in the 25th minute. Alexandre Lima got past James Donachie on the left and on reaching the byline, played a cutback pass for Valskis. But the Lithuanian’s strike was saved by Naveen.

Soon after the restart, Ortiz scored his second. Noguera played Brandon through and the Goan squared it towards Ortiz. He took a first-time shot, which hit the post but he did not miss on the rebound.

Ortiz had the chance to complete his hat-trick a while later but this time, Rehenesh pulled off a fine save.

While the FC Goa attackers were doing their job, they were well backed up by their keeper Naveen, who was at his best to frustrate JFC strikers.

Ivan Gonzalez then hammered the final nail in the Men of Steel’s coffin in the 89th minute with a brilliant goal from a solo effort.

The Gaurs remain on the third position in the league table with 18 points from 11 matches while Jamshedpur went down to the seventh position after the defeat.