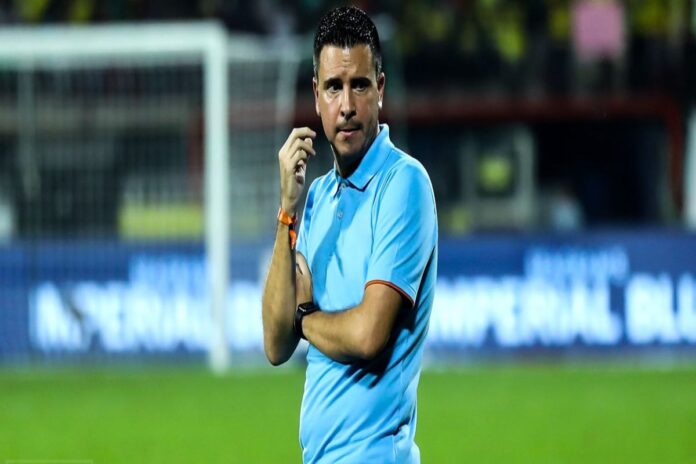 Mumbai City FC head coach Sergio Lobera feels that his team did not play the way they usually do in other games, which led to their stalemate against Hyderabad FC last evening. The ‘Islanders’ remain at the pole position in the league table, having collected 26 points from 11 matches.

Mumbai City FC’s four-match winning streak came to an end after a spirited Hyderabad FC side played tireless football to hold the league leaders to a 0-0 draw.  Surprisingly, the stats are also not too lopsided in favour of the ‘Islanders’, proving that both the teams played on an equal footing. Mumbai City FC head coach admitted that they did not play the way they usually do in other games in the league.

“Hyderabad played well. We didn’t play the same way as we did in the other games. I am not happy because we always want to win three points,” Lobera said after the game,” said Sergio Lobera, during the post-match press conference

“We are a strong team. We keep the ball. But today we played against a team similar to us. We were not comfortable in the first half. We are strong with the ball and we need to be passing it,” added the manager.

Mumbai City FC played without their primary play-maker Hugo Boumous – a move which reduced their balance drastically, even though Lobera feels that should not be an excuse for the result, because they already have a very good squad.

“I prefer to avoid risk and try to recover players. There are no excuses. I have a very good squad. It is not that we lost two points because one player is not available to play. It’s not about one player (Hugo Boumous),” admitted Sergio Lobera.