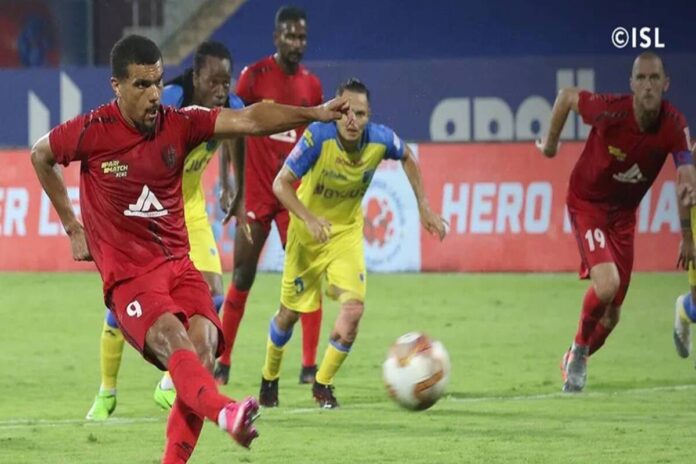 The league is aging well, with the teams breathing in the necks of one another, in a race to secure a place in the play-offs, even though Mumbai City FC have almost cemented themselves at the top. The last week has been eventful as usual, which brings us to this edition of Studs who stole the show.

It has been a long association for the Uruguayan in the ‘Highlands’, with him seeing the ISL side qualify for the playoffs for the first time, while getting their core players swept away by lucrative deals in the following season. But, Fredrico Gallego was always there for them and is even there now. Even though the South American did miss out on a few games in the opening stages, the midfielder seems to be peaking at the correct time. It was the game against ATK-Mohun Bagan that he unleashed the best ever display this season, having netted one and assisted another en-route to a dramatic 2-1 win. Overall, in nine matches this season, the footballer scored twice, assisted four times, having completed 323 passes with an average of 35.89 per game, which speaks for itself. With the play-off spots up for grabs, Northeast United will bank heavily on the playmaker to create opportunities in the remaining matches.

If you followed the 2017 FIFA U-17 World Cup, albeit you came across Rahul KP – a prodigy from the football-crazy state of Kerala. Initial sparks from the youngster promised dear returns in Indian football, but he had to wait for his break. After warming the bench for the majority of the previous season, the right-winger is finally delivering his goods that he is now getting ample of playing time to do the same. It was his strike in the dying seconds of the game that earned Kerala Blasters FC their third win this season – against Bengaluru FC a few days back, while another goal in the following match ensured they took away at least one point from their clash with FC Goa. Rahul KP has already scored three goals for his team this season, while his tricky runs down the wings are hard to contend with for any defender on the other side, making him a lethal weapon in the Tuskers’ arsenal.

The Spaniard has been out of action for the most part of the season due to injury, but the little that he played – Francisco Sandaza has made his presence felt. The foreigner proved his worth by providing an assist during their 4-1 win over Chennaiyin FC earlier this season. It was this week that the ‘Nizams’ faced Bengaluru FC and were down by two goals by the 61st minute of the game. Even though Aridane Santana pulled one back, the Blues were in sniffing distance of a victory, with a few seconds left for the final whistle. Out of nowhere, Sandaza managed to escape off-side, get hold of a loose ball and nudge it into the back of the net to snatch away a point from the fixture. Apart from which, there has been nothing notable for the footballer this season, but with six matches left and Hyderabad FC aiming for a playoffs berth, Sandaza would be itching to be in the thick of things.

It was only a few days ago that Deshorn Brown was plying his trade in a Blue jersey, but was soon roped in by Northeast United in the January transfer window. Having scored the winner against Jamshedpur FC in his debut for the ‘Highlanders’, his arrival was bang on. Up against the league leaders Mumbai City FC in a crucial tie, it took the Jamaican just nine minutes to net two goals confirmed all but three points for the third consecutive match, propelling themselves to the fourth position in the league table at the present moment. Apart from his goal-scoring duties, we cannot overlook the way the foreigner came in support of the defence when the ‘Islanders’ flooded their half with constant attacks. With a point to prove, Brown will be lethal more than ever going into the business end of the tournament, especially with them eyeing a playoff berth right now.

The youngster sprung into the limelight during India’s historic campaign in the 2017 FIFA U17 World Cup, having made some eye-soothing saves. Although he was deported to development side Indian Arrows initially, the custodian joined hands with Kerala Blasters FC for a lucrative deal the following year. He was a regular in the side during the 2018-19 Indian Super League but was released soon after, with ATK roping him. With one appearance in the last season and benched for most parts this time, FC Goa signed the youngster in the January transfer window and gave him a start against SC East Bengal earlier this week. What could have ended as a defeat, read 1-1 mainly due to the brilliant glovework by Manipuri. It’s to be mentioned that the ‘Gaurs’ played with 10-men for almost 20 minutes of the game, but Dheeraj made sure not more than one passed into the net. We are expecting to see more of him this season.