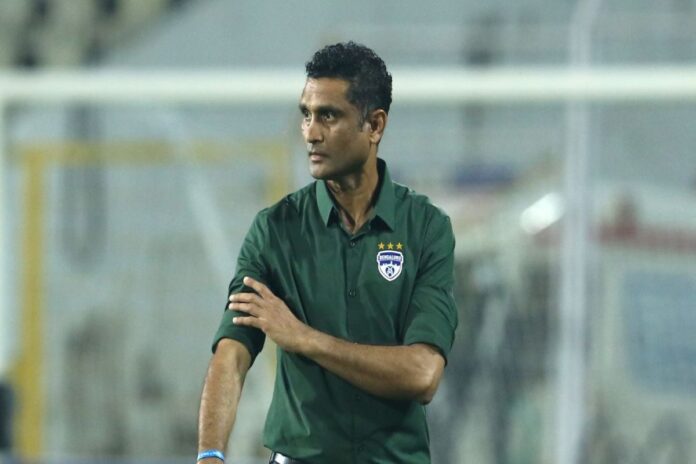 Bengaluru FC interim head coach Naushad Moosa hopes that they would play a better game against Northeast United, having lost the previous encounter to SC East Bengal. The ‘Blues’ have failed to register a win in their last six matches, with their last win coming way back on 17th December last year.

Tough time at Bengaluru FC – with the management parting ways with their erstwhile head coach Carles Cuadrat after a string of poor performances in the ongoing league. To initiate the turnaround, the assistant coach Naushad Moosa was given charge of the senior team, just three days before their clash against SC East Bengal. Even though Bengaluru FC were the favourites to log full points in the fixture, the ‘Blues’ lost the game by a solitary goal, but Moosa is hoping that would play a better game against Northeast United FC this Tuesday evening.

“It’s been a difficult time for everyone. It is not easy. We are working on it. We just got two days to prepare and then just a couple of days. But we cannot sit back and say this. They are motivated. We were better in the second half against East Bengal. Hope to play better against NorthEast,” said Naushad Moosa, during the pre-match press conference.

The ‘Highlanders’ are also struggling in the recent past, having failed to register a win in the last six matches, while lost the last two on the trot. In spite of the form, the Bengaluru FC manager feels that they are not a bad team at all and they cannot afford to be relaxed.

“I have been watching NorthEast. They are not a bad team. We had a 2-2 draw last time. We cannot be relaxed. The players are aware of the roles and responsibilities. We have 10 games in hand, and maybe the match against Northeast will initiate a better start (for the rest of the tournament),” added the Bengaluru FC manager.