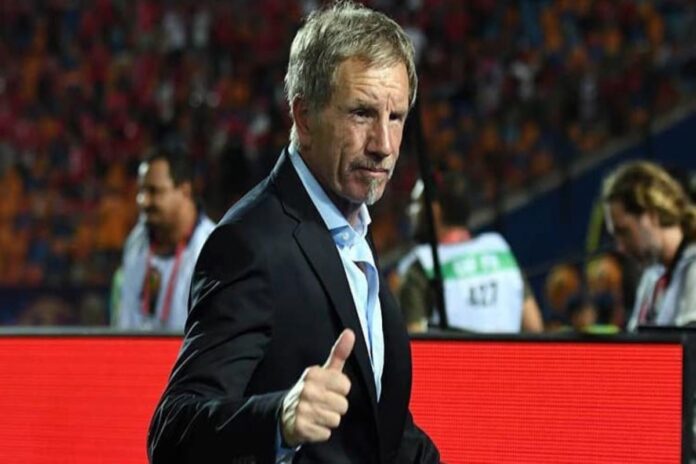 Odisha FC head coach Stuart Baxter feels that they are a renewed side after registering their first win of the season earlier this week, having hammered Kerala Blasters FC with a 4-2 margin. The ‘Juggernauts’ are set to lock horns with Chennaiyin FC in their next fixture this Sunday evening.

Head Coach Stuart Baxter and defender Jacob Tratt attended the Pre-Match Press Conference ahead of Odisha FC’s next game against Chennaiyin FC which will be played on Sunday at the GMC Stadium, Bambolim. Coach Baxter is of the opinion that the match against the Chennai-based side will be a tough one but he expects his boys to have a renewed vigour after a win against Kerala Blasters in the last game.

“We can expect a very tight game. We can expect that we have renewed vigour after our result. It’s gonna be a tight game and I know that we will have to play well if we have to take the three points,” said the 67-year-old gaffer one day before the game.

When asked about the importance of the winning momentum that the Kalinga Warriors got after the last game, he said, “It’s important to the degree that we needed to get those three points to give the players the belief and the confidence to continue the roll around. The players did a fantastic job in retaining their confidence and retaining their belief despite the results being against us sometimes quite unluckily. But, we do need that to gain a little bit of momentum and now hopefully, we can kick on.”

Odisha FC had made a few changes in their formation against the Blasters. They had to miss the services of Manuel Onwu right before the kick-off as well. Explaining further on the formation that OFC played in the previous outing, the Head Coach said, “It was basically we wanted one for the opponents and two it was just using the players we have in a more efficient way. So, Jacob (Tratt) had a different role and did a great job with it. We brought (Gaurav) Bora back into the center-back position.”

“We went with two strikers because we wanted to get further up the field a little bit more quickly and give ourselves the chance to run the combination that we have. It was well done by the players in two or three sessions they have between games to give such a good performance,” he further added.

Diego Mauricio has been one of the finest players in Odisha FC side this season. The 29-year-old Brazilian now has five goals from nine matches in the seventh season. Speaking on the striker, Coach Baxter commented, “Diego (Mauricio) has been dangerous. He has been clinical when we came in the right positions. He is still learning the way we want him to play. He is applying himself. Sometimes, with the players like Diego, you got to be careful not to put him in a little box and ask him to do things that the more average players would do. But, at the same time, Diego has got to understand that we have certain things that we expect from him to allow other players to function.”

Australian defender Jacob Tratt had accompanied the Head Coach for the Press Conference and he hailed all the players for the tough attitude that they have shown in the season so far.

“Obviously, it’s been a difficult start to the season. But, I can honestly say that the boys’ attitude through this difficult period has been first class. Now that we have got the first win under our belt, I think we can push on for here. Like I said with the attitude, if we can keep that momentum then we can go a long way. Everyone is putting in a lot of hard work so the benefits will definitely start to come,” the 26-year-old footballer stated.

Tratt and captain Steven Taylor are the two foreigners in OFC defence which has some of the promising youngsters like Hendry Antonay, Gaurav Bora, Shubham Sarangi and George D’Souza. Explaining more about them playing together in the league, Tratt said, “I felt very comfortable playing alongside him (Steven). I learn a lot just by being next to him. Obviously, he has had a lot of experience playing in the Premier League and for me, I just want to learn as much as I can from him and do my best to play well every game.”

“I guess they (young Indian defenders) all have done extremely well. It’s been a difficult period but the mentality everyday has been excellent and I think the more you stick to that mentality the more success you gonna have. I want to learn as much as I can from Steven and I guess the young boys wanna learn as much as they can from both him and me. I guess that’s the best way to grow and develop as a player.”