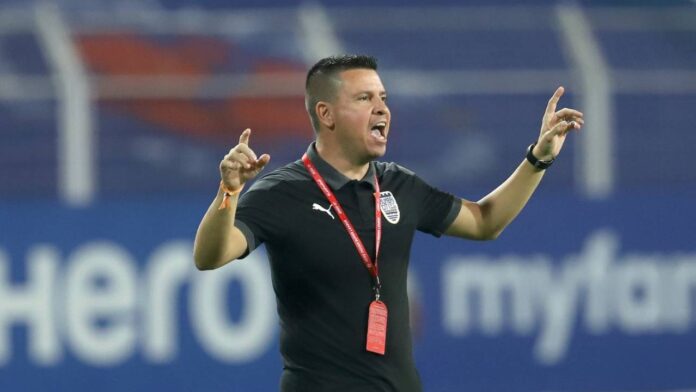 Mumbai City FC head coach Sergio Lobera feels that Ahmed Jahouh gifted away a point to Chennaiyin FC during their match last Monday evening. The ‘Islanders’ remain at the pole position in the league table with 30 points from 13 matches, including nine wins to their name so far this season.

Mumbai City FC were well on their way to extend their lead at the top of the table, with them leading almost one-hour during their clash against Chennaiyin FC last Monday evening. It was Ahmed Jahouh’s carelessness that allowed the ‘Marina Machans’ to score from the spot in the 76th minute and snatch away a point from the fixture. Mumbai City FC head coach Sergio Lobera is convinced that Ahmed Jahouh gifted away a penalty to Chennaiyin FC, which cost them two points.

“We need to avoid these kinds of situations. We have players with experience and we need to know when to do certain things and when not to do. Obviously, it was a big mistake but now we have to focus on the next game. (Ahmed) Jahouh is a very good player and has done well throughout this season but he needs to improve in certain areas. Today he gave away a gift and we lost two points,” said Sergio Lobera, after the game.

Rowling Borges – a vital cog in Mumbai City FC’s midfield, was shown his fourth consecutive yellow card last evening and will miss out on the game against Northeast United FC. But, their manager is not worried at all, stating that he has a very good squad at his disposal.

“I have a very good squad so I cannot give any excuse. (Rowllin) Borges is a very good player and an important player for us but my job as a coach to field the best players for the next game. Losing one player cannot be an excuse for not winning the next match,” said the Mumbai City FC head coach.