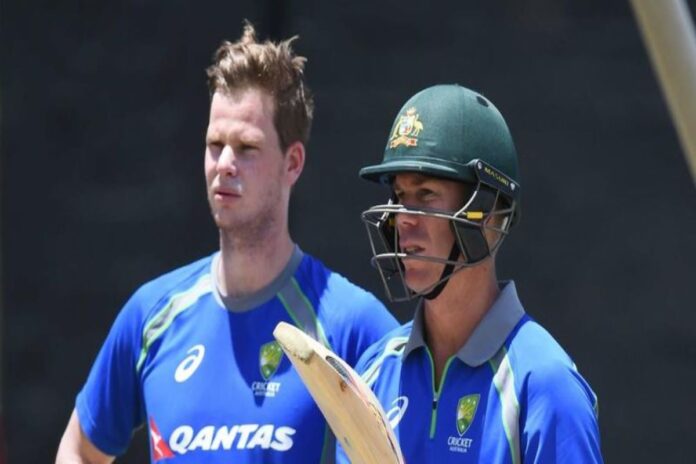 Explosive Australian opener David Warner has strongly come out in support of Steve Smith, stating that he still averages 60 and can have a slump like anyone else. The Aussie no.4 has been undone by Indian bowlers and has had the highest score of 8 after four innings in the ongoing Test series.

Cricket is a funny game, there are phases when you make centuries for fun, while there are other times when even your best efforts can’t buy you a run. After experiencing the former in ample in the second phase of his Test career, right now Steve Smith is going through immense struggles.

Averaging 3.33 in the ongoing Test series against India, the recently displaced no. 1 Test batter has had the highest score of 8 in the first two Tests against India. His returns have been on the downward spiral ever since the 2019 Ashes where he hammered 774 runs in four Tests at 110.57.

Talking about Steve Smith’s wretched run of form, senior batsman David Warner asserted that the right-hander is allowed to have a bit of lack of form at times. He added that even he has gone through horrific times with the bat as was the case in 2019 Ashes.

“Steve Smith has been recently knocked off by Kane Williamson as the best batter in the world (ICC ranking) but if you look at his numbers, he still averages over 60. Everyone is allowed to have a bit of lack of form and I saw that myself when I was in England (Ashes 2019),” Warner said in a virtual news conference, reported TOI.

The left-hander feels sometimes the bowling is just way too good and you get out no matter how much you prepare, which, he believes, has been the case with Smith.

“On a day, if you have your name on that delivery, it is what it is and you can’t do anything about it.

“As you can see that it’s not due to lack of preparation as the guy (Smith) doesn’t get out of nets. He works off his backside all the time.”

Talking about his method of madness, which is about attacking the opposition teams, Warner reckoned that good intent can make bowlers bowl wrong lines and lengths that help the batsmen ease of pressure from their backs.

“My 84 Test matches have always been about pre-meditated attacks and it doesn’t change for me but it’s about how the team looks at it. When I talk about intent, I mean by putting pressure back on the bowlers not just by swinging the bat.

“There are other ways of showing intent which could lead them into bowling those odd full-pitched balls and short of length balls which you can pull or cut. That’s what I talk about when I talk about putting pressure on bowlers.

“It’s about going out there and playing your shots,” said the 24-Test centurion.”

One of the major talking points of the series has been the slow run-rate of the Australian batting, which was even criticized by former Aussie great Ricky Ponting. It has been as much about the hosts’ poor intent as India’s relentless and disciplined bowling, but Warner said that he would rather attack than get out batting sans intent. However, he added that a batsman has to balance things as when the bowlers are doing a great job, they need to be shown respect.

I’ve always said it from day dot, I’d rather go down swinging than sitting there on the crease. If I’m able to get out there I’ll have that intent as I always have. Applying a bit of pressure there can release the tension up the other end, help your partner out.

“On the flip side of that if they are bowling well you have to respect that and that’s what’s happened in the last two Tests. Batsmen have got into that period of trying to bat time then it’s dictated that run rate. You can’t do anything about if the attack is going well. You’ll have to play a shot somewhere … if you nick off someone says it’s a bad shot, if you hit it for four it’s a great shot. That’s why I love it, I live by the sword, die by the sword when I’m out there with the bat.”