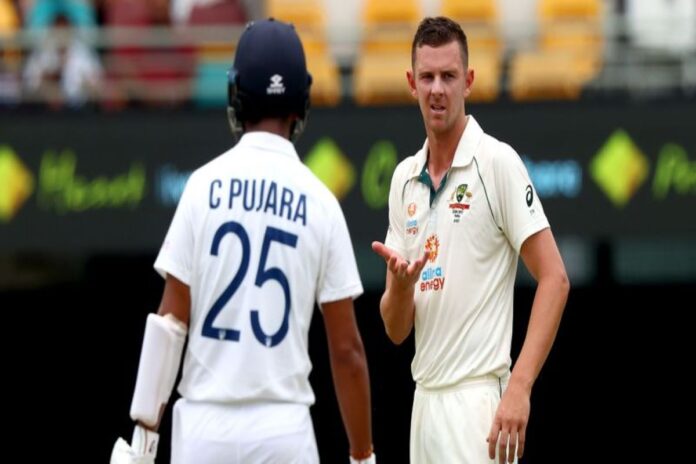 Former Aussie skipper Ricky Ponting is of the opinion that the host bowlers played into the hands of the Indian batsmen. He added that the bowling lacked ‘aggression’ but he also lauded the pair of Washington Sundar and Shardul Thakur for ‘application’ and ‘concentration’ they showed on Day Three.

Day Three of the Gabba Test between India and Australia was defied by a great fightback shown by debutant Washington Sundar and Shardul Thakur- playing his second Test. Both brought up their maiden Test fifties and added 123 runs for the seventh wicket to help India recover from 186 for 6 to ending at 336 in reply to hosts’ 369. Australia have played Josh Hazlewood, Pat Cummins, Mitchell Starc, and Nathan Lyon in all four Tests. And it showed today as after a point they looked tired and didn’t bowl as well as they would have liked which even Hazlewood admitted at the end of the day.

Former Australian skipper Ricky Ponting also wasn’t too happy with the tactics showcased by the Kangaroo bowlers as he felt they weren’t ‘aggressive’ enough and bowled to India’s strengths on what was a ‘struggle’ for them on a ‘flat’ wicket.

“I don’t think they were aggressive enough, didn’t bowl enough short balls. They let the Indian batsmen be way too comfortable at the crease. They almost bowled the way those batsmen would have wanted them to bowl,”  Ponting told cricket.com.au, reported TOI.

“It wasn’t until we saw a bit of a barrage from (Mitchell) Starc and even when Shardul got out (bowled by Pat Cummins), it was no surprise it was a ball after a bouncer. I don’t think the Aussies were anywhere near aggressive enough.”

“It’s been a bit of a struggle for them (Australian fast bowlers), the wicket’s been flat, there hasn’t been any sideways movement and certainly no swing.

Shardul top-scored for India with 67 as he took on the Australian bowlers to the cleaners playing some attacking shots. Sundar finished on 62 and batted solidly in the epic partnership, which made sure that India isn’t out of the game yet. Ponting felt it was ‘outstanding’ batting as the pair didn’t ‘throw’ it away.

“The batsmanship has been a real standout and their application and concentration. They didn’t throw it away. The partnership was outstanding, exactly what India needed at the time which is what they’ve been able to produce in a few Test matches. Shardul at the end went for a shot that probably wasn’t quite on but before that, there wasn’t many false shots at all played by either of them.”

One of the common themes of the Test series has been the knack of fight, grit, and resilience shown by an injury-hit Indian side and today it was no different. After the top six batsmen failed with none converting their starts, India was in a spot of bother still they found a way out. India’s lower-order ensured Australia didn’t gain a big lead. The World Cup-winning skipper lauded India’s ‘fighting’ spirit.

“And with India, we see that they just keep fighting. They’ve been up for the battle and the contest right the way through this series so far,” he said.

“Especially after Adelaide, they’ve been able to produce what they’ve needed to in big moments from there on in.”