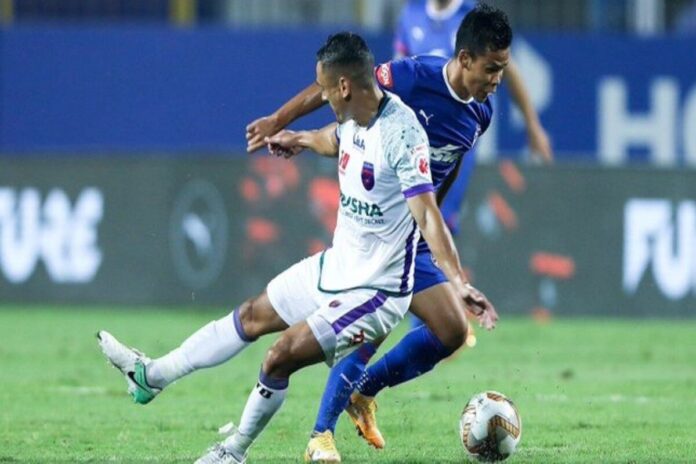 Bengaluru FC’s winless streak continued as they managed a 1-1 draw against Odisha FC in an Indian Super League (ISL) clash on Sunday at the Fatorda Stadium, Goa.

Bengaluru had a bright start at Fatorda, but were stunned by an early goal from Mauricio which came against the run of play.

Jerry Mawihmingthanga took a quick free-kick to Manuel Onwu on the right just outside the BFC penalty area and the latter played a superb low cross into the middle. Mauricio, who was in the box, scored to put his side ahead.

BFC created chance after chance but were let down by not only their sloppy finishing but also Arshdeep’s brilliance in goal.

Arshdeep nearly gifted BFC the goal when he fumbled Parag Srivas’ long throw-in but Opseth just couldn’t make the best of the opportunity as he shot off target.

Cleiton Silva nearly scored the equalizer for BFC in the 68th minute from a set-piece. The Brazilian’s free-kick beat the wall and the keeper, but hit the crossbar and went out of the goal.

BFC were finally rewarded with the equalising goal in the 82nd minute. Paartalu nodded in Cleiton’s in-swinging corner to get his team back into the game.

OFC missed an opportunity to regain their lead within minutes when Mauricio set up Daniel Lalhlimpuia in the box, who got past his marker, but his shot clipped the upright. At the other end, Chhetri blasted his shot over the crossbar from close.

Gurpreet made a stunning save late in the game to keep out Jerry’s close-range attempt.