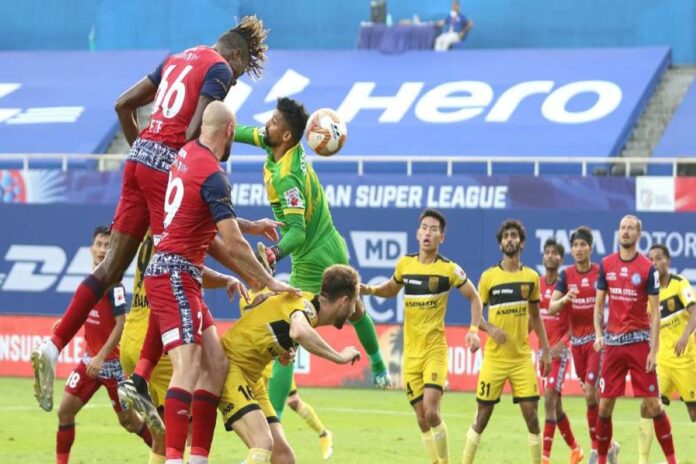 Jamshedpur FC and Hyderabad FC earned a point each after playing a goal-less draw in an Indian Super League match here on Sunday.

The opening half was an intriguing, open-ended contest with both sides hitting the post but failing to find the net. Hyderabad had better chances but Jamshedpur keeper TP Rehenesh produced two fine saves to keep the scoreline goal-less heading into the break.

Jamshedpur started imposing themselves as the first half drew to a close and nearly broke the deadlock from a corner.

The second half turned out to be a scrappy affair. Neither sides were able to carve out clear-cut chances with both sides defending resolutely.

Hyderabad had a chance to score through a set piece but Santana failed to keep his shot on target.

Jamshedpur registered their first shot on target in the 87th minute, with Nerijus Valskis missing a decent chance.

The best chance of the game came in the injury time with Farukh nearly handing Jamshedpur the lead. Prancing into the box after receiving a long ball from Monroy, the forward had only the keeper to beat, but his shot found the side netting.

Jamshedpur have scored only one goal in their last three matches and more than 60 per cent of the goals scored by the Men of Steel this season have come from their striker Nerijus Valskis who also has gone without a goal during the same period.

The game remained evenly matched throughout the 90 minutes as both the sides failed to break the deadlock.