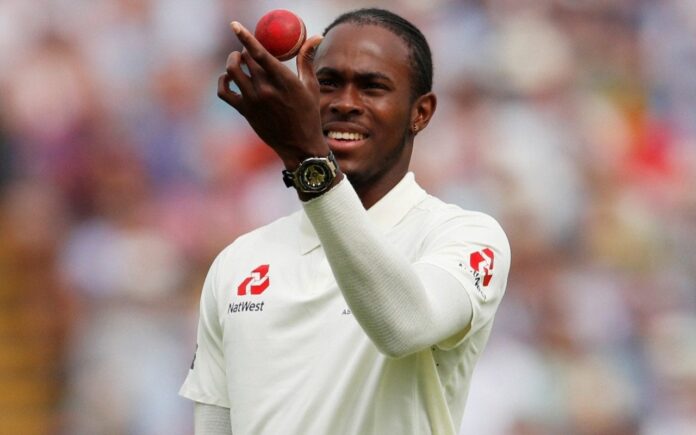 Jofra Archer, who is slated to feature in the Tests against India, hoped for the hosts to dish out wickets conducive for fast bowling, but assured that his side won’t get run over on rank turners. Archer, who was rested for the Sri Lanka Tests, also batted for the ECB’s ‘rest and rotate’ policy.

Having been a part of the Indian Premier League since 2018, England’s Jofra Archer has plenty of experience playing in Indian conditions, but that has only been restricted to white-ball cricket. Archer has not played a single red-ball game in the sub-continent and India, historically, is a country where overseas seamers have struggled, particularly due to the hot conditions but more so due to the flat nature of the wickets.

Expected to lead England’s pace attack in the forthcoming series alongside either James Anderson or Stuart Broad, Archer, in his column for the Daily Mail, wrote that he hoped for the wickets to provide a bit of spice for the fast bowlers to work with.

“One of the things the first couple of training sessions involving us three should provide is an indication of what conditions will be like. I’ve played lots of Indian Premier League here but nothing in terms of first-class cricket, so the challenges of bowling with a red ball will become clearer,” Archer wrote in his column for Daily Mail.

“In the IPL the batters have to come at you, whereas in Test cricket they can sit on you for a full session if they want and if the pitch is dead there is nothing you can do about it. So let’s hope we get some good wickets with a little bit of pace for the bowlers.”

However, even in the case of India dishing out spin-friendly wickets, Archer believes that his side won’t be bullied, owing to the quality of Dom Bess and Jack Leach, both of whom picked up wickets aplenty in England’s 2-0 rout of Sri Lanka.

“Or even some turn, because if they spin, the matches will not be one-sided. We have good spinners in our squad and India won’t out-spin us.”

A bowler of the quality of Archer perhaps in any other year or side would have played all four Tests without a shadow of doubt, but the ECB’s rest-and-rotate policy means that there is every chance that the tearaway quick could end up not playing consecutive Tests in the tour. England have been clear with their ‘rest and rotate’ policy since last summer, and followed it rigorously during the Sri Lanka tour, where they deployed veterans Anderson and Broad in alternate matches.

The England board’s rotation policy has come under fire from the press, fans and ex-cricketers, but Archer voiced his support for the same. The 25-year-old insisted that the rotation policy enables bowlers to ‘give their everything’ in the matches they play, and stated that he would be more than happy to just feature in a couple of games in the forthcoming four-Test series.

“I know that Stuart Broad talked about playing two of six Test matches this winter because the conditions do not necessarily suit fast bowlers and, similarly, if I play two against India I will be happy. As an attack, we must get used to more rotation and it feels good that any one of us can walk away from the team knowing that whoever comes in as our replacement will perform.

“I guess for years it has been a big thing for bowlers to strive to keep their places in the team, but now it’s more like you are passing the baton over in as strong a position as possible.

“You don’t hold back, you must give everything you can when you get an opportunity. There’s no trying to preserve yourself. These are new times in cricket and you have to adjust.”

England’s chances against India will, undoubtedly, rest on the form of Joe Root, who is coming on the back of a monster series versus the Lankans, and the England skipper, incidentally, will be playing his 100th Test next week. Archer was full of praise for the 30-year-old, who he believes will end up playing at least a 50 more Tests for the country.

“To play 100 Tests is a lot of miles in the legs and just thinking about that many as a fast bowler hurts my back. But it’s a great achievement for Joe. With where he is at in his career, and what he is capable of with the bat, I reckon he’s got another 50 caps to come — at the very least.

“He’s a player from the very highest bracket. He didn’t have the form he would have liked last summer, but I am so glad he is back on the horse and running again because we are going to need him, especially on a tour as challenging as this one. For us, it’s great he has rediscovered his best at just the right time.

“The biggest compliment I can pay him is that he played like a local. He adapted well and that’s what the best batters in the world do — adjust to conditions and thrive.One of the big bonuses for us is that we have two subcontinent series back to back and he won’t have to change too much. He can just play the same way and hopefully continue where he left off. It is much more difficult heading on tours one after the other and needing to adapt to different surfaces straight away.”