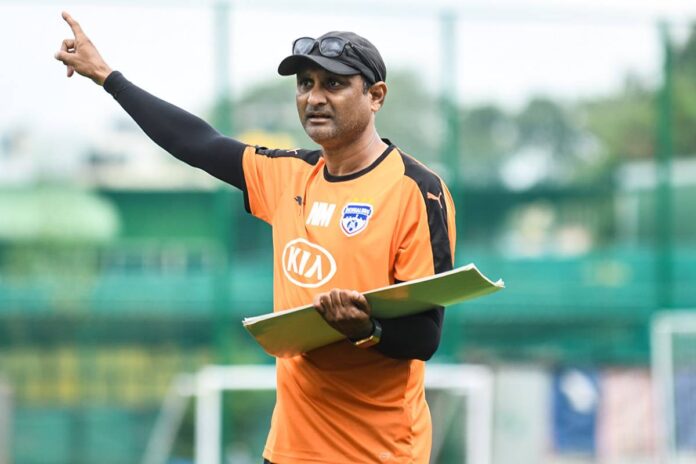 Bengaluru FC interim head coach Naushad Moosa stated that it was heartbreaking to concede two goals in four minutes, forcing them to share points against Hyderabad FC last evening. Without a win in the last eight matches, the Blues are currently at the seventh position in the league table.

For once, after quite a while, Bengaluru FC were in a commanding position, with them leading by two goals by the end of the 61st minute against Hyderabad FC last Thursday evening. But the vulnerability of the squad was once visible towards the ending stages of the game, as they allowed the rivals to net a couple of goals and snatch away a point from the fixture. According to Bengaluru FC’s interim head coach Naushad Moosa, it was heartbreaking to concede two goals in four minutes.

“It is heartbreaking to concede two goals in four minutes. The way they played, they showed character. That’s what we have been struggling with this season – switching off and conceding easy goals,” said Naushad Moosa, during the post-match press conference.

The coach informed that their defender Juanan will miss the next game due to a hamstring injury, while Erik Paartalu will be out due to suspension issues. But he is not blaming fitness issues for the result last evening, instead, he feels lapse of concentration was the reason for the same.

“I don’t want to say fitness is a problem. It is just that we have to be more cautious. We have to be serious till the final whistle. They have been doing well, they had a good game. But it’s just that fraction of a second,” added Moosa.