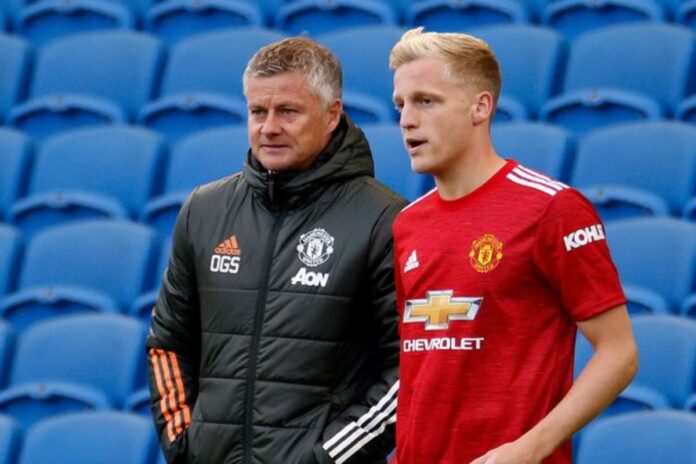 In light of Donny van de Beek’s struggling to get play-time, Ole Gunnar Solskjaer has admitted that the Dutch midfielder will get his chance to become an important part of the team. The 23-year-old has struggled to start games consistently for the Red Devils but has made 19 appearances so far.

When Donny van de Beek arrived at Manchester United after a bright spell at Ajax, a lot was expected from the midfielder but he has struggled to lock down a permanent place in the team. That is partly down to the fact that the Dutch international’s game-time has been limited with Van de Beek showing what he can do in occasional cameo appearances.

He has featured ten times in the league so far but has started just twice although he has made three starts in the Champions League for the club. But with critics and fans unhappy at the game-time the 23-year-old is getting, Ole Gunnar Solskjaer admitted that Van de Beek needs time to become an important part of the team. The Red Devils’ boss further used both Fred and Victor Lindelof’s examples to help explain and added that challenging his current midfield hierarchy takes time.

“Donny has played well when he’s got the chance. I think we are too quick sometimes to jump on that if he isn’t playing, that it is a failure. Victor [Lindelof] and Fred are good examples in my team that it takes a little bit of time and now they are massively important players in our squad and in our team and it will be the same with Donny. He has come in and is in a midfield pool of players with quality, challenging with Bruno [Fernandes], Juan [Mata], Jesse [Lingard],” Solskjaer said, reported Goal.

The Red Devils do have an overabundance of midfielders with eight potential options for Ole Gunnar Solskjaer to field although Bruno Fernandes has become a permanent fixture in the team. That leaves only two spots for the Norwegian to fill and it has caused a few problems in terms of selection. But despite that, Solskjaer confessed that there are many options and Donny van de Beek has impressed when he has gotten a chance.

“I’ve got loads of no.10s and loads of centre-midfielders with Paul [Pogba], Nemanja [Matic], Scott [McTominay], Fred. There are many of them and Donny has played well when he’s got the chance and that is a big thing, that you are ready. He is always ready, he works hard in training, [is] positive and he will make differences in many games for us this season, but he’ll grow more and more even for next year,” he added.