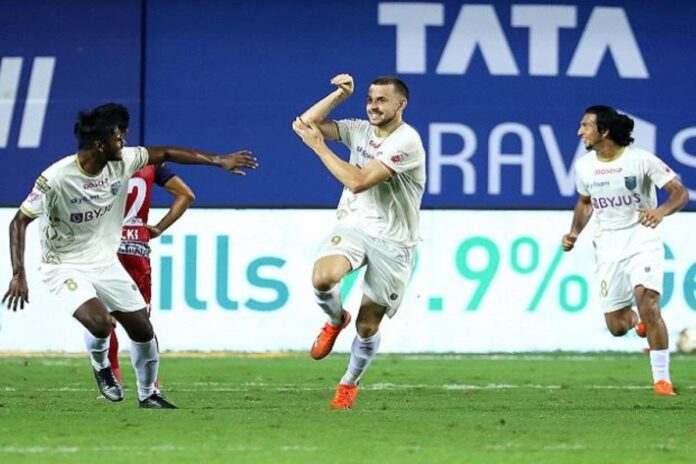 Jamshedpur FC’s return to action after a long gap didn’t turn out well as they went down by a 2-3 scoreline to Kerala Blasters FC in the 54th match of the 2020-21 Indian Super League (ISL).

The opening half saw six attempts within 19 minutes, including a save from Jamshedpur goalkeeper, Rehenesh TP. Nonetheless, Costa Nhamoinesu put the Blasters ahead a couple of minutes later, with a close-range header to the bottom-right, following a set-piece cross assist from Facundo Pereyra.

Nerijus Valskis (36′) equalised for Odisha before the break.

Owen Coyle’s men started the second half on a good note by winning a series of set-pieces.Jamshedpur FC equalized out of nowhere as Valskis scored the first direct free-kick goal of this season.

Jamshedpur dominated proceedings after the restart, making constant raids into the opposition box but could not find a way.  Kerala were reduced to ten men just after the hour mark after Lalruatthara was shown a second yellow card for a rash tackle.

Stephen Eze’s clearance from a throw-in fell nicely for Facundo Pereyra, who weaved his way into the box and took a shot. Unfortunately for Jamshedpur FC, TP Rehenesh pushed it into the danger area and Murray finished the job after that.

Eventually, Kerala Blasters FC held on for a thrilling 3-2 victory.