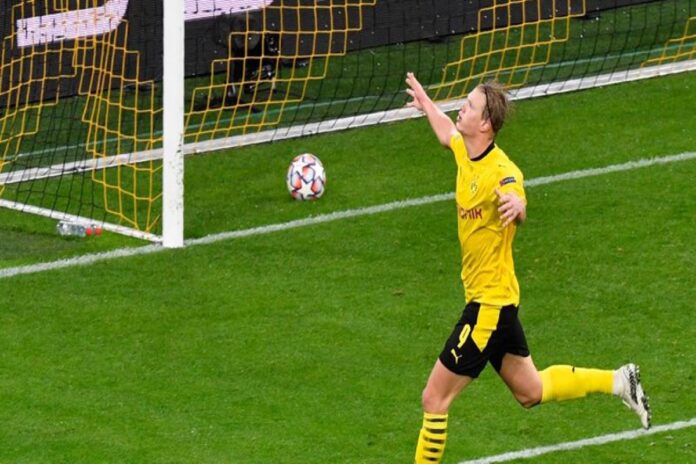 Sky Sports has reported that Erling Haaland has emerged as one of Chelsea’s top summer targets alongside West Ham’s Declan Rice with the Blues looking to reinforce their squad. The 20-year-old has thrived since his January 2020 move to Borussia Dortmund with 33 goals in 32 appearances.

Despite spending upwards of £200 million before the start of the 2020/21 season on seven new players, Chelsea are still looking to improve their squad with the Blues targeting a few new additions next summer. Reports have indicated that it includes a new striker to partner Timo Werner and a defensive midfielder after their move for Declan Rice failed to materialize in the last transfer window.

However, while Chelsea’s continued interest in Rice has been well documented over the last few months, Sky Sports has reported that the West Ham man is still on their summer shortlist. He isn’t the only one as the report has revealed that Erling Haaland is the second name on it. The Norwegian has thrived since signing for Borussia Dortmund with 33 goals in 32 appearances and that includes 16 goals in his twelve appearances this season.

It has seen quite a few clubs linked with a move for the 20-year-old with his suitors including Manchester City, Real Madrid, and Barcelona amongst others. The report further indicates that the Blues are looking to activate his £68 million release clause but that doesn’t come into play until 2022 which could complicate Chelsea’s move.

Frenkie de Jong is a top player and would be a great signing for Manchester United, admits Rio Ferdinand