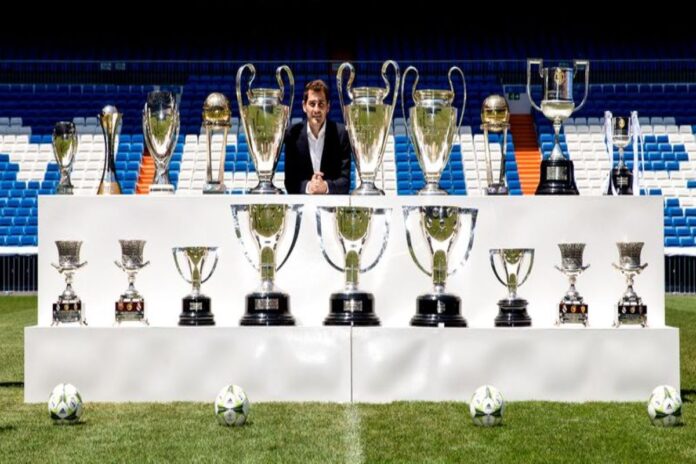 In a statement released by the club, Real Madrid has revealed that Iker Casillas has rejoined the club as a deputy CEO / assistant to the general director. The 39-year-old spent nearly twenty years at the Santiago Bernabeu before he left for FC Porto in 2015, where he spent five years.

After five years away from the club, Real Madrid legend Iker Casillas has made his return, with the Spaniard taking up a new ambassadorial role. The 39-year-old spent twenty years at the club after joining as a youth product in 1996 and went onto make 725 appearances for the Los Blancos. Not only that, Casillas won five La Liga titles and three Champions League trophies before he left for Porto in 2015.

While he did win two Liga Nos titles with the Portuguese giants, Casillas did not play the final season with Porto after he suffered a heart attack in May 2019. The goalkeeper announced his retirement from football a year later and in a statement released by Real Madrid, has joined “the Real Madrid Foundation as an assistant to the general director”. The foundation was established, in 1997, with a focus on using sport to improve the lives of young people in Madrid, where Casillas will work alongside CEO Enrique Sanchez.

“Real Madrid C. F. have announced that Iker Casillas has joined the Real Madrid Foundation as an assistant to the general director. Iker Casillas is a Real Madrid legend who represents the values of our club and is the best goalkeeper in our history. Casillas won 19 titles during the 25 years representing the club: 3 European Cups, 3 World Club Cups, 2 European Super Cups, 5 Leagues, 2 Copa del Rey, and 4 Spanish Super Cups. In Portugal, with Porto, he won 2 Leagues, 1 Cup and 1 Super Cup,” reads the statement on Real Madrid’s official website.