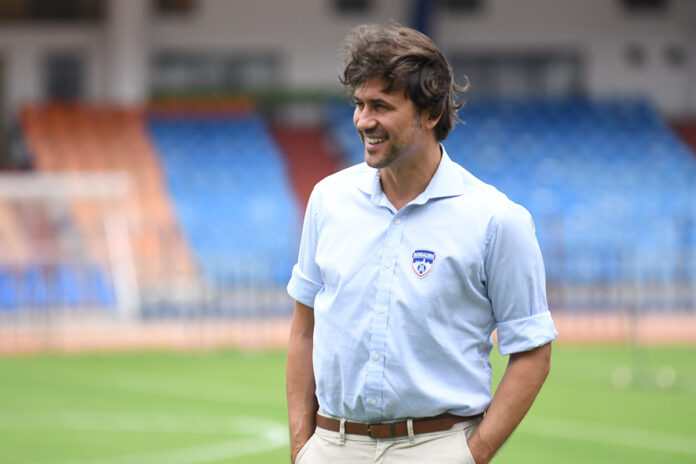 Bengaluru FC head coach Carles Cuadrat revealed that they have formulated their own plan for their match against Kerala Blasters FC on Sunday evening. The ‘Blues’, having collected six points from four matches and are in the fifth position in the league with them currently unbeaten after four games.

Apart from the win over Chennaiyin FC by a slender margin, Bengaluru FC has been held to a draw in each of their remaining three matches, even though they have played better in most of the cases. With them set to play against a struggling Kerala Blasters FC side, the ‘Blues are eyeing no less than a win. Their head coach Carles Cuadrat has revealed that they have formulated their own plan to apply in the upcoming match.

“Blasters need the points. They have just two (points). We have a plan and we will try to get three points. I’m feeling sorry for the fans. They enjoy this kind of match. I am sure it will be a game of passion,” said Carles Cuadrat, during the pre-match press conference.

It’s quite surprising that a team like Bengaluru FC have won just one match so far, with them boasting of top-quality Indian players like Sunil Chhetri, Ashique Kuruniyan, and Udanta Singh in their ranks. But, Cuadrat feels that are working well and have to be strong mentally and physically.

“I think we are working well. We will be getting more points. We have six points but we could have eight or 10. We have to be mentally and physically strong. Some teams had more pre-season but they were not able to take three points. This is something we are working on and we will eventually get there,” added Cuadrat.