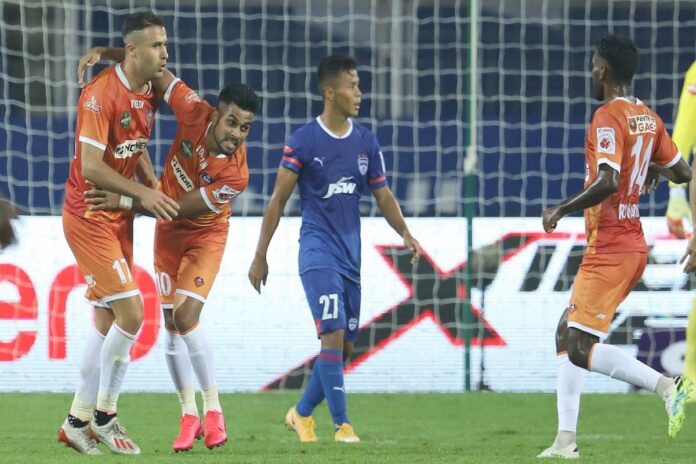 We are already into the fourth week of the Indian Super League and so much has already happened in the action-packed season. Some players have disappointed, while others have pushed above their weight, which brings us to this edition of – Studs who stole the show – Week 3.

The Indian Super League is in full swing and we are having a blast, with the ‘so-called’ underdogs like Northeast United FC and Hyderabad FC making the headlines, while the big guns have misfired to a certain extent. There have been few sensational individual performances in the past week. Let us have a look at the ‘Studs who stole the show – Week 3.

The Lithuanian striker has already proven his worth in the previous season, having netted 15 goals in 10 matches, while the 6 assists was a bonus for Chennaiyin FC – as they stormed to the final in a miraculous way. New season, employed by a separate franchise – Jamshedpur FC, one thing constant in Nerijus Valskis’ – his desire to score. With five goals from four matches, the European is currently leading the charts in the ongoing Indian Super League, striking at a rate of at least one goal per match on average. ATK-Mohun Bagan, a team which kept three clean sheets in the first three matches, couldn’t stop the dynamic striker from registering a couple of goals to hand them the first loss this season when the two teams met last Monday evening. Not to mention that the bond between head coach Owen Coyle and Nerijus Valskis, which started during their Chennaiyin FC days – is becoming stronger and a reason to worry for others.

A first-timer in the Indian Super League, but is a seasoned campaigner nevertheless with the Belgian plying his trade in the Jupiler Pro League and the Azerbaijan Premier League prior to his invasion in Indian shores. It did not take long for him to get his footing in the tournament, having established himself as a stalwart in the central defensive position for the ‘Highlanders.’ Having played in every minute of this season for far, the footballer has made 31 clearances, 12 blocks, 8 tackles and 7 interceptions, which includes a Man of the Match award in the game against Bengaluru FC. The Gerard Nus coached side is yet to lose a game in the ongoing season, part of the credit goes to the compact defense. With Lambot in their ranks, the opposition will have their work cut to score against them in the rest of the season.

Joint top scorer in the ongoing season, along with Nerijus Valskis, the Spaniard is making the headlines in his first-ever season in the Indian Super League. Not too efficient in the game-building process, Igor Angulo is a classical No.9 – a poacher to put it more clearly. With five strikes in four matches, the foreigner has marked his arrival in style and even guided the ‘Gaurs’ to their first-ever win this season, also earning them two vital points against Bengaluru FC and Northeast FC respectively. With the likes of Edu Bedia in the midfield, there’s an abundant supply of balls flowing in, making his life easy up-front and nightmarish for opposition defenders at the same time. With him scoring plenty of goals for his former side Gornik Zabre in the Polish top division, Angulo is riding his form and we’re expecting to increase his tally further in the upcoming week.

A part of the core group which shifted loyalties from FC Goa to Mumbai City FC prior to the season, following the footsteps of Spanish coach Sergio Lobera, Mourtada Fall was expected to provide solidity to the defence for the ‘Islanders’ and he has not disappointed so far. The Senegalese is too good to be left out of action even for a single minute, with the 32-year old in the thick of things whenever the ball is in their half. It was due to his stellar display that Chennaiyin FC failed to net the equalizer during the mid-week fixture. Overall, the footballer has been on the pitch for 341 minutes, completed 253 passes, at a rate of almost 50 per match. Apart from which, Fall has made 26 clearances, 14 interceptions, 7 tackles and 2 blocks during the same time frame. No wonder they have conceded just two goals and have the best goal difference among all the teams.

It would not have been fair not to include an Indian in the list, with the local stars putting up some sensational performances in the tournament already. To include a player from SC East Bengal – a team which is yet to win a match this season invites immediate criticism, but the way he guarded Jamshedpur FC’s forward line – demands appreciation. It was in the 24th minute of the game that SC East Bengal crippled, with Eugeneson Lyngdoh being shown the marching orders. From there on, it was Jamshedpur FC’s attack versus SC East Bengal’s defence. Even with the likes of Nerijus Valskis in their ranks, the ‘Red Miners’ failed to net the winner, with Mohamed Irshad playing a pivotal role in the act. Quite naturally, he was adjourned the ‘Player of the Match’ at the end of the game for his heroics. With a passing accuracy of 73.1%, the footballer has made 13 clearances 5 tackles so far this season, with many more to come.