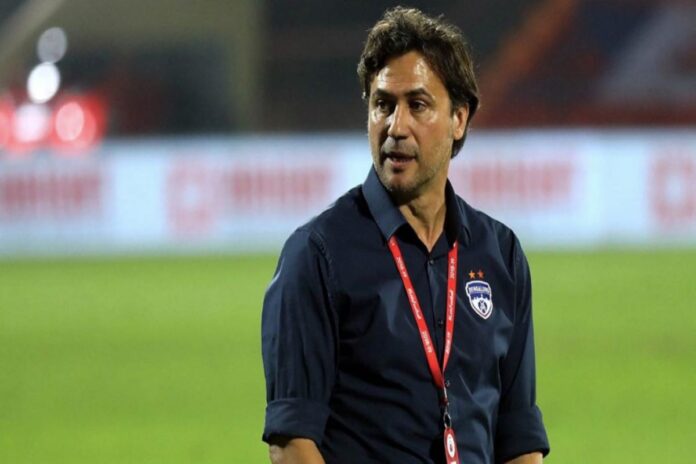 Bengaluru FC head coach Carles Cuadrat has admitted that Jamshedpur FC deserved more points than they have actually managed to collect. Third-placed Bengaluru FC will lock horns with 6th placed Jamshedpur FC at the Fatorda Stadium, this Monday evening, with a chance to go to 14 points.

Poor refereeing has been the most talked about topic in the Indian Super League rather than the football itself, with them often changing the outcome of the game. Unfortunately, Jamshedpur FC had to bear the brunt of most of the incorrect calls made by the referee for which they have lost quite a few points in the season so far. Ahead of Bengaluru’s clash against Jamshedpur FC, the former’s head coach Carles Cuadrat has admitted that the ‘Red Miners’ deserve more points than they have, going by the way they have played this season.

“Jamshedpur are doing good work. They deserve to have more points. Bad refereeing and some last-minute goals have cost them the points. Their foreigners are getting better week after week. The young Indians are also doing well. It is going to be a difficult game for both teams. They are a tough team but we have our plan and we will try to get three points,” said Carles Cuadrat, during a chat with Goal.com.

With talismanic striker Nerijus Valskis in their ranks, Jamshedpur FC is already a force to reckon with in the ongoing season. But, according to Carles Cuadrat, they have their plan formulated to stop their ferocious forward line – as ‘The Blues’ have already done in the past.

“We have a plan, a good structure and we have conceded the least goals in the previous season. We will miss Ashqiue (Kuruniyan) and so, we have to restructure. But we are a team with a plan and we have been working together for a long time. We have stopped brilliant strikers like Coro (Ferran Corominas), (Modou) Sougou, or (Batholomew) Ogbeche,” explained Carles Cuadrat.