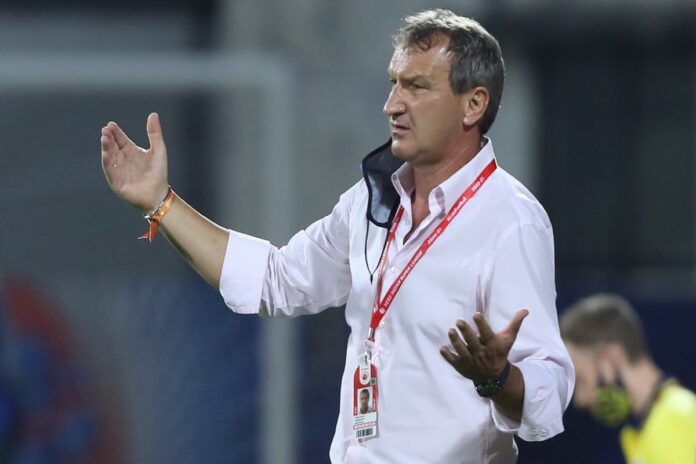 Chennaiyin FC head coach Csaba Lazlo stated that he is speechless and disappointed with the 2-2 draw against SC East Bengal last Saturday weekend. The ‘Marina Machans’ took the lead twice in the game, only to see the Kolkata-based side equalise each time and snatch away a point from the game.

Chennaiyin FC’s win against FC Goa was not unexpected or a surprise, but apparently, it looked like their resurgence after hiccups in the initial stages of the league. What was set for an easy ride against an ever-struggling SC East Bengal, the ‘Marina Machans’ made a meal of numerous opportunities to share the spoils in a 2-2 draw last Saturday evening. Csaba Laszlo’s men took the lead twice and managed to give away the lead in each case – which has disappointed the manager as well as made him speechless.

“We lost two points because you know if you stay onside you got to score. It’s not normal. You have to self-critique. We create and we miss and for this reason, I’m speechless and disappointed,” said Csaba Laszlo, during the post-match press conference.

Indian winger Lallianzuala Chhangte, who was in sniffing distance of the goal many a time in the league but couldn’t quite get over the line, managed to net the first one of the evening last night. Csaba Laszlo is monitoring him personally and stated that he deserved the goal against SC East Bengal and he hopes that Chhangte will continue his goal-scoring duties in the upcoming games.

“I am working individually with Change because I think it’s a goal he deserves today. I hope he will continue to score goals,” added the Chennaiyin FC manager.