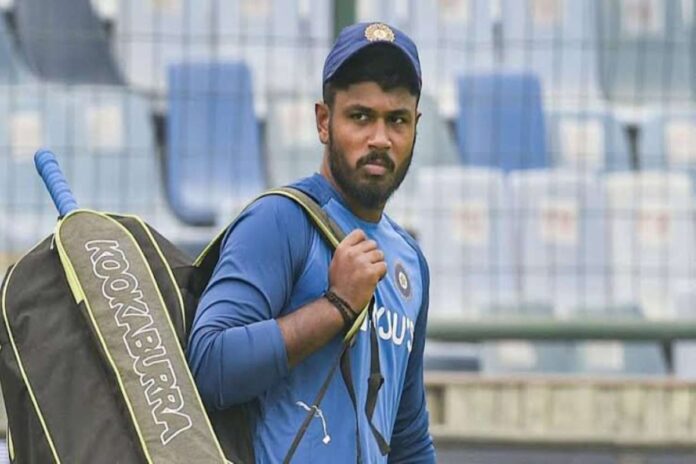 Sanju Samson, who was picked on the back of an amazing IPL season, stated that he was disappointed with his inability to convert his starts into a big score Down Under. Alongside that, however, Samson cited that he showed selflessness and intent that the team demanded from him against Australia.

After a stellar season for the Rajasthan Royals, where he scored 375 runs in just 14 innings – all coming at a strike-rate of 158.89, Sanju Samson was picked in the T20I squad for the tour Down Under. While he was paired in the lower middle-order with Hardik Pandya, his role was to ensure that India faces no hiccups in the middle-order, in terms of runs scored alongside accelerating the scoring rate.

In all the three innings – Samson got off to a start – 23,15 and 10 before holing out to the fielders. While his starts gave India a ray of hope, it was taken away in double-quick time when the right-hander was unable to convert them into a substantial score such as Hardik Pandya. After his return, Samson in an interview with TOI has stated that he is disappointed to not make a big score in Australia.

“Obviously, I am disappointed that I could not carry on and make bigger scores. But I think I showed the selflessness and intent the team demanded from me. Also, I managed to dominate till I go out. In cricket, even if we do everything right, sometimes results may not go our way,” he said, reported TOI.

Samson also threw light on the days he spent in the bio-bubble environment, both for Rajasthan Royals in the IPL and for India in the series against Australia.

“I think every sportsman should experience that quarantine feeling. We always tend to shy away from connecting with our inner-selves in normal times. But living in a bubble was a blessing in disguise for me. I got a lot of free time so that I could read and meditate more and also think about my game and devise ways to improve it,” he added.

The swashbuckling batsman also credited his coach – Jayakumar for overturning his fortunes during his slump period in the Indian Premier League, where he wasn’t getting the runs.

“I have been working with Jayakumar sir for the last four-five years. He is one coach who doesn’t interfere with your game when you’re doing well and it is only when you are struggling, he would come forward and offer you the right kind of help. When you are on a lean patch, often your own people would start to doubt you and that’s when the phone calls with him helped me regain my touch and play that crucial knock against MI in a winning cause,” he concluded.